The Earl and the Archeress by E. Elizabeth Watson 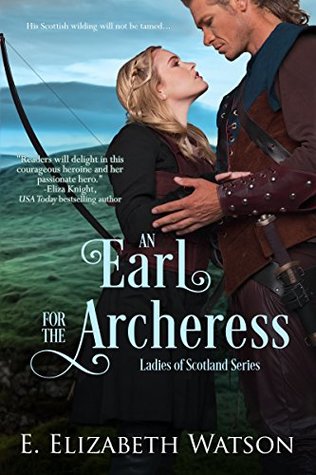 I think this might be a case of me being the wrong audience for the book. There were some things about THE EARL AND THE ARCHERESS that were fun but it doesn't really feel like a medieval romance. It's too modern and too clean. It's kind of like the Disney/theme park version of medieval times, which almost makes me think it would have been better as a fantasy novel. Bar the sexual content, it even sort of has a YA feel to it. Because of the heroine, I think this would really appeal to fans of Sarah J. Maas.

For my part, I came pretty close to liking this book. I love female archers (I blame Katniss) and one of my favorite romance novel tropes is when girls dress up as boys. I just wish the hero hadn't kept saying that she wasn't like other girls. There was a lot of slut-shaming, on the part of both the hero and the heroine. It was a shame because the heroine had a really good explanation for dressing up as a boy but the empowerment was only limited to her.

And I found I got tired of Mariel pretty quickly. She rolls her eyes every other page, to show her defiance, I guess. I wanted to like her, but I quickly got really frustrated with her character. I mean, she's a total Mary Sue. She's emaciated from starvation and yet has a perfect rack? Body fat does not work that way. Also, barely anyone side-eyed her for wearing men's pants. This is early Medieval. Pretty sure she would have been burned as a witch or something.

For the right audience, I think this book will find a lot of fans. Like I said, fans of Sarah J. Maas and Kristin Cashore will probably enjoy this, but read it as a fantasy novel and not historical fiction.