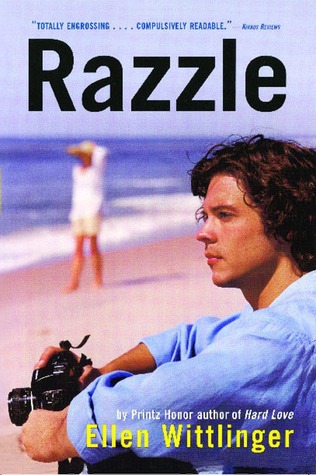 No one on my friends list has reviewed this book, surprisingly! Or maybe not so surprisingly, since it came out twenty years ago and Ellen Wittlinger was never the "marquee" name that authors like Carol Plum Ucci and Sarah Dessen were. RAZZLE is a really interesting story, although I don't think I liked it as much when I read it as a teenager. I thought it was boring back then! Haha, what a fool I was. It's a very mature YA with some mature themes, and a lot of those themes went over my head when I first read it.

RAZZLE is a lot like Jerry Spinelli's STARGIRL in some ways. A wistful, ordinary boy moves to a close-knit small town environment and falls under the spell of a manic pixie dreamgirl who teaches him how to live. Or, you know, whatever. Unlike Stargirl, however, Razzle actually has some nuance to her, and her backstory is interesting and sad. You kind of get the feeling that she's as weird as she is as a way of overcompensating for everything that has-- or hasn't-- happened to her.

Ken, the hero, is also much more interesting than the protagonist of STARGIRL. For one thing, he's an artist: a photographer. For another, he ends up in a love triangle between Razzle and the town bad girl, Harley, who's incredibly manipulative and flits from boy to boy. Despite the warnings he gets, Ken pursues her anyway, which of course results in tons of drama.

I liked this book a lot. I liked how the teens felt like teens, making stupid or selfish decisions while trying to be seen as grown-up. I liked the adult side characters, especially Frank. I liked the small town, New England beach environment, and how at times the story felt almost gothic. There were some gorgeous passages about rain and the dunes that I could totally envision in my head. I also liked how focally art was centered in the narrative because I love art, even if I'm not very artistic myself.

It's a shame this book seems to be forgotten by so many people because I think a lot of teens who read it now would really enjoy it. The lack of technology dates it a little but I think it would really appeal to anyone who likes THE SUMMER I TURNED PRETTY and those sorts of summer coming-of-age stories.