Out of the Night by Robin T. Popp 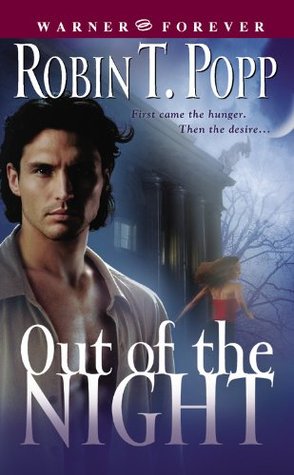 How can I NOT support an author who loves Star Trek and writes science-fiction/paranormal romances? That's like asking me to hate avocados or feminism. I just can't do it. Also the book was only $1.99. And it's about vampires. Goodbye, money. I hardly knew ye.

Initially, I was like, oh my God, I do NOT understand all the haters for this book! Sure, it seemed like a bad movie from the Syfy channel, but on the other hand, it seemed like a bad movie from the Syfy channel! Even if you don't like what you're watching, you still get plenty of yuks. Love Spell romances are the same way and I did about three takes at the publisher info because I was like, "THERE IS NO WAY THIS WAS NOT PUBLISHED BY LOVE SPELL," but apparently it was published by Warner Forever, so more fool me. The beginning was really good, too. Unlike 90% of paranormals which take place in Northern America or Europe, this was set in the Amazon.

The premise is pretty cheesy. Because it involves chupacabras and a convoluted vampire mythology that is seriously lolz-inducing. Lanie, a librarian and volunteer firefighter, goes to a city in the Amazon to track down her father, a cryptozoologist who went missing during his research on the chupacabra (lmao). One of his friends charters a plane for her and the pilot is Mac, an ex-Navy SEAL. When they get to his camp, everyone is either missing or dead and there's evidence of foul play and mysterious gargoyle statues locked in cages. Lanie immediately goes, "Huh, that's weird. Let's unlock it!"

Surprise! The gargoyle statues are actually chupacabras! AND NOW THEY ARE FREEEEEEE!

So this has one of the most original takes on vampires I've ever seen in a book, which gives it a bonus point. Humans become vampires by either being bitten by other vampires or turned by the venom in a chupacabra's teeth. I think humans killed in vampire attacks become vampires but if they're bitten by chupacabras and don't die, they become something called a "changeling" which is basically a daywalker, i.e. a good vampire that doesn't need to go around murdering people. I giggled for about a solid thirty seconds about the idea of chupacabras transforming people into vampires. It's so good.

Mac gets bitten by a chupacabra and starts transforming (oh no!) and then he and Lanie return to the U.S. to track down the bad vampire and Lanie's father, who is also a vampire (I think a changeling). At this point, the story gets pretty boring and dragged-out. I stopped paying attention and started skimming pretty heavily as soon as it gets into the "oh no, they're coming for the gov't" territory and "oh no, the bad vampire kidnapped the human girlfriend of the good vampire" plot device that literally EVERY vampire romance written in the aughts seems to have (I blame TWILIGHT). Also, it ends with a wedding, which is just SO romance novel. Even with gov't coups, there's still time for a wedding.

I wanted to like this more than I did but it was cheesy-bad and not-cheesy good. Whoops.