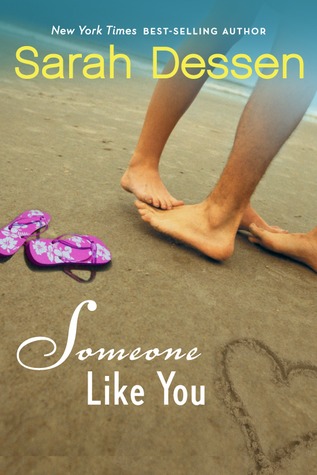 So I'm doing this project that you're probably tired of hearing about at this point, but in case you haven't heard me yapping about it yet, it's called the Literary Sad Girl Canon, and it's basically me rereading some of my old faves (or not-so-faves) and seeing how the books I read when I was younger hold up now.

Sarah Dessen was one of the staple authors of my teen years. I can guarantee that she was on the shelves of probably most of the girls in my middle school and high school classes. There just weren't that many authors like her who wrote about what she did, and if there were authors like her, they weren't really being widely publicized and most of us didn't have internet to tell us about it. We had what we had.

SOMEONE LIKE YOU, like most of her books, is hard-hitting and jam-packed with emotional content. It's about two girls, Halley and Scarlett, who are best friends. Scarlett finds out that her boyfriend, Michael, died in a car accident and is utterly devastated; her tragedy only peaks when she finds out that she's carrying his baby.

Halley, on the other hand, starts dating Michael's friend, Macon, and they have an intense and maybe not so healthy relationship. Sarah Dessen seems to specialize in writing bad boys. Macon wants to take things to the next level but with her BFF living out the IRL equivalent of a cautionary tale, Halley isn't so sure. Meanwhile, Halley's parents are suspicious of her new boyfriend and taking away her freedoms in an attempt to stifle her relationship, and pretty soon Halley is feeling as trapped as Scarlett.

I can totally see why this book is so unpopular among my friends. I liked the friendship between the two girls, but there is a definite dearth of likable female characters in this book. All the girls are boy-crazy and in it for themselves, and slut-shamed by the protagonist. The mothers are both kind of awful. Scarlett's mother seems to be impulsive and possibly manic-depressive and it's implied that Scarlett takes care of her more than the other way around. Meanwhile, Halley' mom is a self-help parenting guru who uses her relationship with her daughter for guts and glory, and seems to be in it for herself.

I did ultimately end up liking this book but it isn't as strong as JUST LISTEN or DREAMLAND, which were my favorites of this author's growing up. SOMEONE LIKE YOU isn't terrible, but it doesn't stand out, either, and I'm already kind of forgetting the story even though I just finished it a few hours ago.