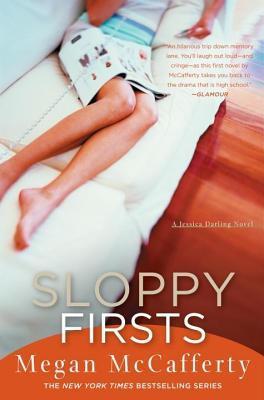 So I recently found my old copies of books #2 and #3 from the original publisher (Broadway Books) that I somehow never got around to reading when I read SLOPPY FIRSTS for the first time. I don't know where my copy of book #1 went. I lent it to my sister and then never saw it again, heh. But anyway, I remember really loving this book when I read it in my late teens/early twenties because of how Jessica Darling's snark resonated with me, a precocious curmudgeon who also hated everyone and thought all other people were phonies.

There's an afterword in the new edition I splurged on for Kindle that talks about how the author made the decision to make this book more PC because attitudes that were commonplace when this book was first published in 2001 don't fly now. On the one hand, I respect that, but on the other hand, she was like "hopefully no one will notice" and, lol, I definitely noticed. I don't think it's a bad thing, necessarily, but it is at odds to see 2020 wokeness about people of color elbowing in with 2000s party culture and slut-shaming. It feels really weird and I'm not actually sure that this was the best move, because making it progressive in some ways makes the not-so-progressive stuff way more glaring. I did think it was interesting how the original version of this book was published under an adult imprint because teen and children's books were lumped together and she felt like the topics were too mature for middle grade (probably true). So I did appreciate the afterword, even if just for context.

Regarding the story itself, it was fun. The original came out when I was still in grade school, so reading this made me very nostalgic for all the pop culture references of yore. It also made me realize how much I seriously DON'T miss high school in the slightest. All the drama is so exhausting and so utterly unimportant in the long run. I really did like Jess for the most part because I felt like a lot of her observations were pretty on-point and it was amusing how she could see through the BS even as she simultaneously bought into it (the catch-22 of high school). I loved the love interest, Marcus Flutie, and when I read the poem he wrote her, I. DIED. Bad boy love interests done right, seriously.

I'm giving this a three-star rating because it got so exhausting after a while and the book was so much longer than it needed to be. The comparison to Louise Rennison is fair, but I do think that the Georgia Nicholson series is slightly better just because I felt like Georgia had a more complex relationship with her group of frenemies, whereas Jess seemed to totally hate hers, and I also think that there just wasn't enough action to really keep this book engaging and some of Jess's internal monologues felt, well, like an adult trying to sound hip through a teen avatar. I did like it but it doesn't quite hold up.