Lord of the Storm by Justine Davis 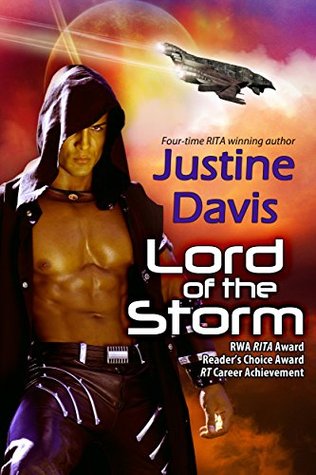 As someone who was reared on Star Trek, I have a soft spot for alien/space opera romance novels, especially when done well. Despite its cheesy cover, LORD OF THE STORM is a pretty dark and incredible romance novel. I breezed through it in basically a day, sucked into the plights of the two protagonists.

The heroine, Shaylah, is a starship captain and a war hero. When she is on shore leave, her friend gives her a slave as a present to amuse her. The slave is named Wolf, a beautiful but haunted man from the planet Trios, which Shaylah's people razed and destroyed. Wolf is a glaring reminder that war does not determine who is right: only who is left, and that some wars truly are fought without honor.

As she gets to know him, her disgust with herself and her people mounts. She finds rapport with Wolf-- and then horribly abuses his fledgling trust by taking advantage of him. It's a truly disgusting scene and haunts her for most of the book as she comes to terms with her own sense of selfishness and superiority. I think it will be hard for a lot of people to read-- since it is basically rape-- but the author handled it well.

I don't want to say too much about the rest of the book because of spoilers, but it was incredibly action-packed and a real treat for anyone who likes space opera. It's got all the big checkmarks: rescue attempts, hostile planets, laser fights, chains of command, geopolitical intrigue, and so much more! My only complaint is that it felt like a lot of the main couple's fight scenes started to feel really repetitive after a while (although I guess it made sense) and some of the sex scenes were a little too cheesy even for me and I felt like the bad guy got off too lightly, but apart from that, I was totally in love.

Major props to my friend Heather for recommending this book to me!