The Disenchantments by Nina LaCour 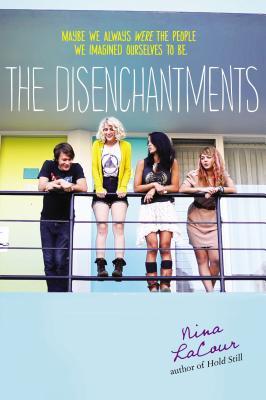 I recently read EVERYTHING LEADS TO YOU by Nina LaCour and it was so good that I decided that I simply had to read everything I owned of hers, ASAP. I don't normally like books about road trips or books about bands, so when I found out that this book was about both of those things, I was like "yikecycles." But, on the other hand, who else could shatter your jaded genre-bound ennui but a fave?

So let's get down to business.

Our cast of characters:

Bev: Flakier than a pie crust and not as sweet

All of these teens are going on a road trip through the Pacific Northwest because the girls are in a band. It's actually a really terrible band, but because they're all hot, they keep getting booked. Because this is America. Colby gets to come because he's their ride and also (less importantly) their friend. The plan is initially that they drop Meg off at college in Portland and then Bev and Colby are going on a trip to Europe that they've been planning all year-- but oh, once they're on the road, Bev is like, "You know how you threw away all your college plans for this? JK! I changed my mind without telling you and I'm going to RISD!" and the girl is so thick-headed that she just doesn't understand why he's so mad.

The best parts of this book are the road trip itself, surprisingly to me. Sleazy hotels, restaurants with hot tubs in the back, bars that are waaaaaay too comfortable giving booze to teens, lots of art talk. It feels like a 70s movie starring Brooke Shields and Farah Fawcett and maybe also John Travolta. But tensions are high because Flaky Bev won't tell Manic Pixie Friendzone why she bailed. And when she does, she tries to couch it in "one time I saw my mom fucking someone else and it traumatized me for life and now I can't have healthy relationship" guilt, which... no, that's NOT how that works, Bev. Just because the fuckboys do it doesn't mean it's #feminism to turn the tables and be a fuckgirl.

So this wasn't a bad book, but it wasn't nearly as good as EVERYTHING LEADS TO YOU and it made me really mad. I actually had to check the publishing date because it felt like it was published in the mid-aughts when indie teen movies were all the rage. I half-expected Michael Cera to pop up.