His Captive by Diana Cosby 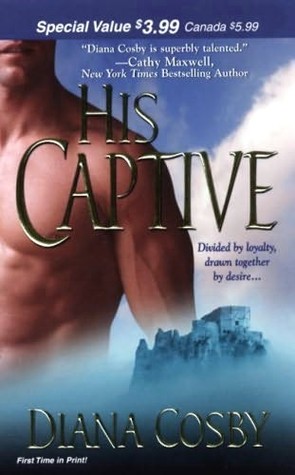 Zebra seriously has the best romances, I swear. Lately all I've been wanting to read are medieval romances and I was especially excited because HIS CAPTIVE was set in Scotland (I used to live there!). Set in medieval times, it's about a woman named Nichola who is the brother of a drunken wastrel of a baron. When a Scotsman named Alexander comes to kidnap him, he runs away, leaving Nichola at the man's mercy.

So this is a captive romance which will automatically put some people off. I personally liked the book and one of my favorite parts of the book is when they are traveling to Alexander's lands. The book kind of falls apart when they get there, though. I didn't really care for Alexander's brothers at all. They kind of have the bro-y, super macho dynamic of Christine Feehan's Carpathians or the guys in J.R. Wards BDB series.

This also ended up feeling more like a wallpaper historical than I would have liked. I kept forgetting what time period this was set in because the characters talked in such a modern way. And that's fine, too, but the story just wasn't good enough to carry me along and I really mourned the lack of atmosphere. Give me the knights and the toiling of the land!

I liked it enough that I bought the sequels but I wasn't as wowed by this as I would have liked to be.