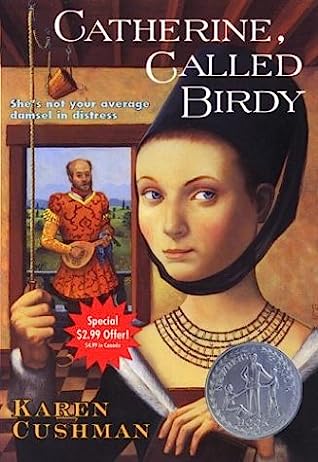 Since I actually remember reading this one in school, I thought CATHERINE, CALLED BIRDY would be the perfect addition to my rereading project. I remember this book being like a breath of fresh air because so many of the books we had to read in school were pretty boring because they definitely felt like literature for kids and a lot of them were about boys, as written by men.

CATHERINE, CALLED BIRDY is about the daughter of a land-holding knight living in medieval England. Even though she is only fourteen, her father is already planning on marrying her away. In between hanging out with the sheepherd and practicing being a lady, Catherine conspires on how to rid herself of her suitors, whether it's blacking out one of her teeth and acting like she's crazy or pretending to be a peasant and sowing rumors of her own ill repute while in disguise.

We also get to learn a lot about her family. There's her father, a drunken lout who was apparently quite the heartthrob when he was 15. There's her mother, whose one act of defiance was marrying down to her husband. And then there are her three brothers, Edward, Thomas, and Robert (in order of favoritism). She also has a friend Aelis who may or may not be in love with her uncle George. There's a lot of side characters, too, all with distinct personalities, and because of Catherine's naivete, she ends up acting as an unreliable narrator, so reading between the lines often tells you the fuller story.

Because of its mature themes-- miscarriage, drunkenness, grief, death, love, gender roles, a light examination of antisemitism-- it holds up pretty well. I'm actually kind of surprised we were able to read this in grade school. I'm guessing whoever approved it to the curriculum didn't look any deeper than the cute cover and the Newberry. It's one of the more entertaining middle grade books I've ever read and I'd compare it to THE TRUE CONFESSIONS OF CHARLOTTE DOYLE or THE WITCH OF BLACKBIRD POND, as it shares the same feminist, empowering themes with its realistically portrayed strong female protagonists.