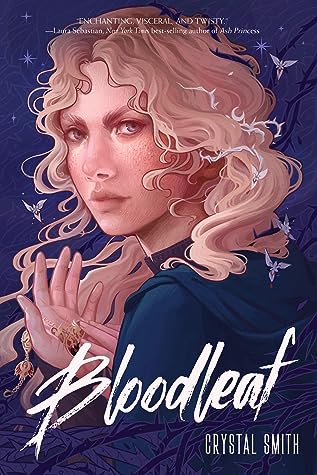 I decided I had to read this book after my friend Heather gave it five stars because we tend to have the same frustrations about YA fantasy. BLOODLEAF, however, is that one book out of one hundred that manages to turn all the usual tropes on their heads. It has innovative and interesting world-building, a compelling mythology, a strong female protagonist, real emotional stakes, and some really good twists and plotting that left me guessing (even if my guesses were right).

The plot is a little confusing and less is definitely more when going in, but the main character is a teen girl named Aurelia who is engaged to be married to the prince of a neighboring kingdom. Her own kingdom is like Scotland in the peak of its witch-hunting frenzy, and unlucky for her, she happens to be a witch. When she is betrayed, she ends up being forced into hiding and flees to the neighboring kingdom incognito where she discovers a treacherous plot to undo their magical protections and throw the entire city into darkness.

Aurelia is such a great narrator. She immerses you into the story without overwhelming you with info-dumps. You, the reader, basically see everything in real time as she's experiencing it. This book made me feel all the feels, too. There were some real gut-punching moments in here that made my stomach drop. I also like the three-tiered magic system of feral, high, and blood magic. Also, it's worth noting that blood magic involves cutting, so there's a lot of that in here (in case you needed to know).

BLOODLEAF was so much more than I dared hope it would be. I can't wait to read the sequels.