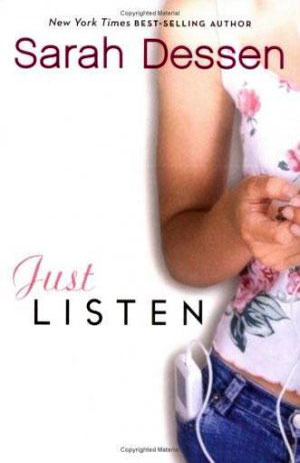 So I'm doing this project called the Literary Sad Girl Canon, which is basically me rereading all of Young Me's faves and then judging them as an adult. The project has actually mostly been a success; it turns out I had pretty good taste as a kid. Go figure, right? I guess that's why I became a blogger or whatever. (Hahaha...)

Anyway, the latest item on my project was Sarah Dessen's JUST LISTEN. Sarah Dessen was basically the Colleen Hoover of the early 2000s, okay? She brought the angst and the bad boys and the tortured teenage girl drama, and us millennials at that shit up on silver spoons. I can guarantee you that practically every girl who read books in my middle school and high school years probably had at least one copy of something by this author languishing on their shelves next to LOVELY BONES. I'm honestly surprised none of her stuff ever became movies.

JUST LISTEN was the book I was most amped about reading because it reminded me a lot of SPEAK, only with an emphasis on music instead of art. Like Melinda, Annabel's life is disrupted by a sexual assault: and like Melinda, she is bullied and shamed for it, and all of her old friends turn against her because they blame her and not the boy. Unlike Melinda, Annabel has other stuff going on. Her older middle sister is struggling with an eating disorder, she's a model (but getting sick of it), and she's basically learned to deal with all of her problems by running away.

The title of the book comes into play on multiple levels. The guy in Annabel's life, Owen, does indie radio, and attempts to get her involved in underground media. But Annabel also learns to listen to her own internal voice, as well as to her sisters and the people she considered her friends: people who care about her who she pushed away when things got hard. Sometimes Sarah Dessen's books can feel kind of slow-paced, but I felt like there was tons of action packed into this one.

I'm giving it four stars instead of five for several reasons. The first reason is that the narrative feels clunky. There's a ton of info dumping because the author made the creative decision to do these cutaway asides diving into Annabel's past instead of dual timelines, and I kind of feel like a dual timeline might have made these transitions easier. The second reason is Owen. He's not a bad love interest but I found him really annoying. He's kind of a manic pixie dreamboy and he is really obnoxious about music. Which is realistic for teens, who tend to define themselves by shit like that (ask me what my thoughts were about metal at seventeen), but I rolled my eyes at his spiels a lot.

Overall, though, this book holds up super well. DREAMLAND used to be my favorite Dessen book but I think this one is much better, especially if you like SPEAK.