The Book of Luke by Jenny O'Connell 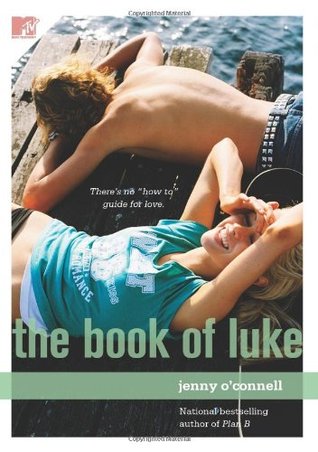 Sometimes when I dislike a book, I have an extremely visceral response to it and want to be like, "NOBODY READ THIS." Even though I understand that there is a book out there for everyone, no matter how horrible I personally find it. Like, no joke, I have actually (very rarely) thrown copies of books in the recycling if I hated them enough, just so one less copy would be floating around out there to wander into the hands of some unsuspecting individual, because YES, I am that petty, and also that book sucked.

SURPRISE! This book is not that book.

I'm so pressed for time these days that I actually expanded my DNF reviews to include two star reviews, because I feel like there are different reasons why I decided not to finish something. I've had people come after me for rating my DNFs, but here's the thing: if a book is bad enough or unexciting enough that I was unable to get to the end of it, I think that says a lot about what I thought. I'm also done giving chances to books that just don't wow me. I review them because I'm dumb enough and forgetful enough to accidentally buy them again, so the one and two star rating acts as a sort of red light to me that says, "Oy! Nenia! You've been down that road before. It's a baaaaaad road."

THE BOOK OF LUKE came out while I was still in high school. I'm pretty sure I read it while I was still in high school. Unlike some of the books I've been rereading from those years, this one didn't really leave an impression at all and I went in with virtually a blank slate. Which can be a good thing, honestly. My tastes are pretty drastically different now from what they were in high school. I'm more patient with unlikable or unreliable narrators than I used to be as a judgy teen. Plus, I think it's easier to be objective about teen drama when you're not swimming in it yourself.

The problem with this book? It's way too young for me. It's purely high school drama, and while it is more feminist-angled than other books from this time, the fact that it revolves around boys so prominently was a little exhausting. YA romances bore me unless they bring something else to the table, and the fact that the heroine's "niceness"/push-overness was the backbone of her character maybe hit a little too close to home, but that was tiring too. I do like the idea of a bunch of BFFs banding together to write a sort of relationship bible teaching dudes the dos and don'ts, but I just wasn't feeling this book or its narrator. Your mileage may vary.