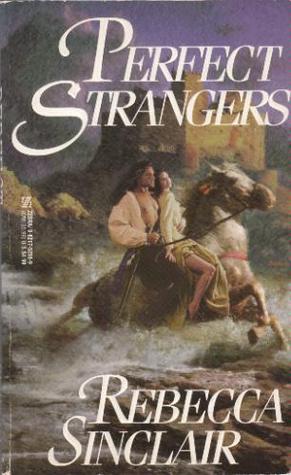 After reading and loving CALIFORNIA CARESS by this author, I went ahead and bought everything she had released on Kindle. CC was a Western set in the 1800s, but PERFECT STRANGERS is a romance set in Scotland just before the start of King James's reign. Quite a different time period and setting. I was excited to see how she'd handle it.

The beginning of the story is pretty good. Gabrielle was an orphan in Queen Elizabeth's court, but then she is set off to marry in the Douglas family, partly to create allies during the border wars and partly because Lizzie is a jealous cat who can't stand the thought of any other woman snagging some male attention.

Gabrielle thinks she's marrying Colin Douglas but the man who snags her is actually his twin, Connor, who thinks to snub his nose at Colin. Also, because she's English, Connor figures that he can get her with child and then she'll conveniently die off due to cold, childbirth, etc. come winter, thereby leaving him single and with a son. Ha ha! What a charmer.

Joke's on him, though, because Gabby is actually plus-sized and quite robust, which he likes quite a bit, although he pretends he doesn't. He was right about the winters, though. After buckets and buckets of rainfall, Gabby takes chill and ends up abed with a fever while Connor and his aunt take turns nursing her back to health. There's a kidnapping, some boink-a-doinking, some fights, and then a joyous ending where the couple decides that despite both of them being terrible people, they're in luuuuurve.

I don't remember CALIFORNIA CARESS being this purple prose-y but this one was ridiculous. The sex scenes seriously had me rolling my eyes. I also thought there were too many of them, often at inconvenient times. In the forward, the author said that when she rereleased this book, she toned down the brogue for readability and I thought she did a really good job with that and the dialogue. And, like I said, the beginning was good. It just needed more action and less boink-a-doinking. I also didn't need to hear how HUUUUUGE the heroine was, over and over. Like, she's actually grateful when some evol Scotsmen are giving her the lecherous eye. Ew. Please, give us plus-sized ladies some respect.