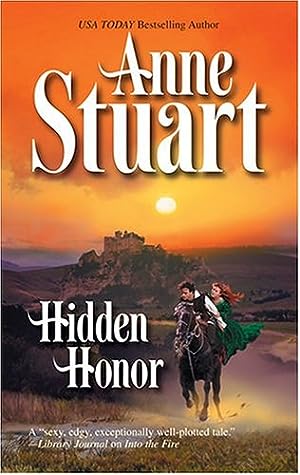 I've long said that Anne Stuart's historicals are among her best works and HIDDEN HONOR is no exception. Set during medieval times, this is the story of seventeen-year-old Elizabeth, a headstrong girl who is being sent to the convent to become a nun. She is to make the journey with an escort of monks, including Prince William, a cruel and hedonistic prince who is going to an abbey to be shriven of his sins.

Right away, Elizabeth catches the prince's eye. Only he's not exactly what he seems. For his own protection, the "prince" is going incognito, swapping uniforms with one of the monks. Right away, you learn that the man she thinks is William is actually a monk named Peter, who turned to the church to atone for his guilt in participating in the crusades. With him is Adrian, his cousin and knight to the king, who is there to act as the king's bodyguard. But the real prince might just be the wrench in all of their respective goals, with devastating consequences.

So I kind of loved this. Elizabeth was a pretty great heroine. I thought it was hilarious that she was feeding her philandering father potions to make him impotent. The fact that she was so young also made a lot of her actions excusable that would be more frustrating in an older heroine. To my surprise, I also really enjoyed the secondary romance between Adrian and Joanna, a courtesan. Normally, the secondary romances in Stuart's romances are tedious and read as filler, but this one didn't. Also, I really, really liked that the main hero was a celibate monk who hadn't been with a woman in over seven years. It was a totally refreshing change of pace.

I've been on a medieval romance spree and this was an excellent addition to my growing collection. I kind of wish I owned it in paperback because I think this is one I would actually reread. The only reason it isn't getting five stars is because all of the denial and prolonged UST between the main couple got kind of frustrating and repetitive, but I loved the banter and the action and the subterfuge, so four stars feels right.