The Lily Brand by Sandra Schwab 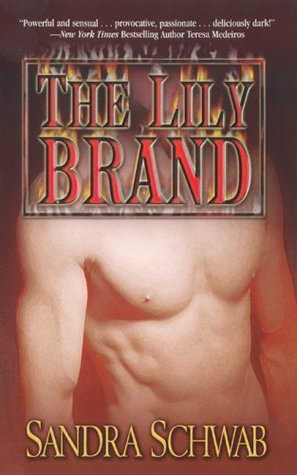 This was my first book by Sandra Schwab but I can guarantee you that it isn't going to be the last. One of my favorite tropes in romance novels is when a tortured hero is saved by the heroine, which is exactly what happens here. Schwab puts an interesting twist on it, though: the heroine, under the cold eyes of her psychotic stepmother, tortures the hero herself. YIKES ON BIKES.

Camille is an evil, brutal woman who uses men as playthings and refers to them as "it" and as "toys." She tortures them, mentally and physically, until they do whatever she tells her to. To a lesser extent, she treats her stepdaughter, Lillian, the same way. She wants to initiate Lillian to follow in her own footsteps and the hero, Troy, is to be her plaything. After branding him (yes, seriously), Lillian feels incredible guilt. It's the last straw. So she takes Troy with her to the gardens, to a secret passage where she plans to escape. After taking Troy with her partway, she abandons him with her gold cameo necklace to pay for his passage. Then the two of them part ways... until they meet again. DUN DUN DUN.

Now in England, Lillian is living with her aunt and grandfather. She is on the fringes of society and flirting with a man named Alex. But bad luck! Alex is the cousin of Troy, who hasn't forgotten what Lillian did to him. He stops their engagement by assaulting Lillian at a party, and only fate keeps him from going further. They end up forced into marriage to save Lillian's honor, and you could cut a knife through the tension between them, as Troy's hatred festers even as Lillian's guilt mounts.

This was just so well done. It's kind of a Gothic romance with a couple nods to bodice-rippers of old. Camille is a great villain-- she reminds me of Asharti in Susan Squires's THE COMPANION-- and I liked that the heroine and the hero both did cruel things to each other. It was also refreshing to see a book where the heroine repeatedly comes to the hero's aid. Lillian was cold because she had to harden her heart to tragedy, but it was really more of a self-defense tactic to keep from getting hurt. Juxtaposed against that icy exterior are softer moments where you get an idea of what she could have been like, if not for her trauma. The hero is the same way. Even though I wanted to scream at him for NOT TALKING TO HER, it actually made sense for his character because he was so full of bride.

I also loved that the secondary romance in this book was a gay couple. Since this book was published a while ago, that came across as pretty progressive. Especially since they weren't stereotyped at all. I loved Lord Allenbright and Mr. De La Mere. They were both great characters and the intimate scenes between them were as great as their more active roles to the plot. All of the other side characters were pretty interesting too, especially Antoine, Camille's right hand man, and Nanette, Lillian's nanny.

If you like dark romances and are okay with some light questionable content and enjoy it when the heroine gets to save the hero and everything is drenched in angst and anguish, this is the book for you. It's slow-burn as all get-out but that just makes everything that happens between them way more satisfying because it feels like you've earned it at that point. I can't wait to read more from this author!