Table for Five by Susan Wiggs 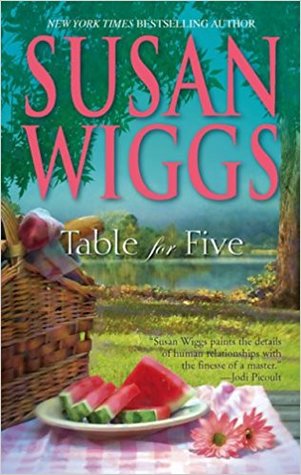 This came in a bag of books someone gave to me when they found out I like to review romance novels. I don't normally read fluffy romances, especially not fluffy romances revolving around children and parenthood, since that's not something I'm really interested in personally, but I've read and enjoyed Susan Wiggs's historicals and Harlequin Mira is one of my favorite modern-day publishing imprints. So I gave it a shot.

The premise of this book is pretty unique. It's about an ex-wife and ex-husband with three kids, all of whom have problems. When the youngest starts stealing, they end up at a parent-teacher conference with a woman named Lily, who's best friends with the ex-wife. Shortly after, they have an argument and there's a terrible car accident that leaves both parents dead. The three kids are wards of the state until custody is given to their uncle, Sean.

Lily ends up stepping in to help since Sean is kind of a stranger to taking care of kids. They have totally different styles of leadership when it comes to guiding children, with Lily being more by the book authoritarian and Sean being very lax. The two butt heads while trying to figure out how best to care for the children and solve their problems, while also slowly but surely falling for each other.

It's a cute story-- to the point of almost being saccharine-- but the characterization was really well done. I thought about putting the book down several times but I was emotionally invested enough that I wanted to get to the end. It's waaaay too long though. The pacing in the beginning was dramatic and excellent but then the middle is SUCH a slog. This book did not need to be almost 500 pages. The golf talk was boring and it felt like there were way too many POVs. Cameron, the oldest child, did not need to have so much air time, and his secondary romance with Becky was pretty boring, NGL.

With a lot of skimming I did ultimately end up liking this enough to finish. If you like cute, feel-good stories, you'll probably love this a lot more than I did.