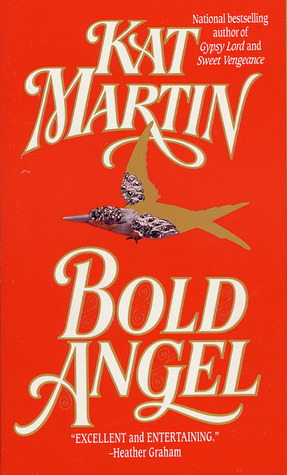 I've been holding onto this medieval romance for a while. I like some of Kat Martin's romances a lot but others definitely fell short. This one, BOLD ANGEL, is quite good, but it has a lot of potential triggers for sensitive readers. Actually, it reminded me a lot of another much-maligned romance, Jude Deveraux's THE TAMING.

BOLD ANGEL takes place during the reign of William the Conqueror. Normans and Saxons are at odds, and during one of these raids, the heroine and her disabled sister are attacked by Normans. The sister is raped and the heroine is badly beaten. The hero, a noble Norman knight named Raolfe, feels incredible guilt for their circumstances because he encountered them right before the rape/beating and feels like it wouldn't have happened if he had been there to escort them personally.

A few years later, Caryn, the heroine, is fully grown and in a convent along with her sister, Gweneth. She is chafing at the confining rules, but finds herself longing for the safety when once again, Norman invaders come to the convent and demand the novice girls for entertainment. Caryn is taken to what used to be her homelands and, along with the other girls, molested and threatened, but the entrance of Raolfe and his men puts a stop to that. He saves Caryn from rape by saying that she is his betrothed, entering the two of them in a marriage of convenience.

This isn't quite a bodice-ripper, but it is definitely a lot grittier than many romances being published today. The rape and beating scene in the beginning is pretty brutal and sets the tone for the rest of the novel. Raolfe is actually a pretty good hero for the times being presented, which isn't saying much since women of the medieval period were basically chattel with which men could do what they wished. He has an OW and sleeps with her several times, before the heroine and him consummate their relationship and also after. He has a pretty good reason for doing so and it makes sense for his character, but it's also one of the reasons this book has such low ratings. So if that's something that you feel uncomfy with, you shouldn't read this book. I personally can't stand cheating in romances if they are contemporaries but find it easier to stomach in historical romances as long as it makes sense and the hero isn't a total asshole.

On that note, the hero talks about beating the heroine several times. He gives her a spanking for defying him and when he thinks she has compromised his men and his land, he slaps her in the face hard enough that she tastes blood. Again, physical violence is not something I'm okay reading about normally but since this was set in medieval times, it was a little bit easier to bear just because it felt like something a lot of medieval men probably would have felt pretty comfortable doing. That doesn't excuse the fact that it is abusive behavior and obviously unacceptable in the twenty-first century but it was one of the ways I was able to compartmentalize enough to finish the book and see it to the end.

Overall, I really liked this book a lot. It shares many themes with her other book, DUELING HEARTS, which also had a hero and heroine who constantly butted heads. Martin writes pretty strong-willed heroines and pits them against alpha heroes who often behave questionably, but usually the heroine manages to get back at them a couple times. I liked this scene in BOLD ANGEL, for example, where the heroine is pissed off that the hero doesn't notice her homemaking abilities and then allows his men to trash the place, so she makes sure it's a total sty the next time he and his men come back. Little things like that added a dose of realism to the book and kept the story from being too brutal. The villain and the villainess were both suitably awful but with backstories that almost made you feel sorry for them and there was tons of action and character development. I enjoyed this much more than I thought I would.

Even with the sex scenes talking about "fiery chariots" and comparing spasming vaginas to a "mare munching oats."