Colder Than ice by Maggie Shayne 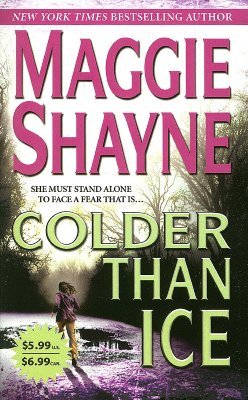 I got this from a Little Free Library. There's nothing really wrong with this book, it just wasn't to my taste, which is a shame because the premise is AWESOME. Beth is an escapee from a cult called the Young Believers, which was run by a man named Mordecai Young. When the government did a raid on the compound, she was shot in the womb by one of the soldiers and ended up in the ICU. Everyone thought she would die, and her one child (which she had with the cult leader) was sent to be raised by a friend. Later, Beth tried to get her revenge by shooting the cult leader but he armored up with Kevlar and all she did was break a few ribs. She went under witness protection and now lives in a touristy little town in Vermont.

The cult leader, obviously, is looking for her to plan his revenge but surprisingly, the soldier who shot her ends up crossing her path, too. His name is Joshua and he has a teenage son named Bryan and he feels so much guilt over accidentally shooting Beth that it destroyed his marriage to his ex-wife, who died in a plane crash. He's shocked to discover that he feels an intense attraction to Beth, the woman he's supposed to be protecting, but he's afraid that if he tells her who he really is and how he knows her, she'll never want to speak to him again.

I love dark romances and I feel there was a lot of good stuff going on in the background here, but I just didn't really feel the chemistry between Joshua and Beth. Honestly, the whole time I was reading this, I was thinking about Anne Stuart's RITUAL SINS, another romance about a damaged heroine and a cult leader, only in that book, the cult leader is the love interest. I just felt like this book couldn't decide whether it wanted to be dark or not, so it settled for Diet Dark, hinting at exciting turns of events and subplots but then dancing nimbly away before shit got real. If you like romantic suspense, you'll probably really enjoy this. It just wasn't really for me. When I read dark, I want dark-- and when I read fluffy, I want fluffy. Please do not mix them, thanks.