Life After Theft by Aprilynne Pike 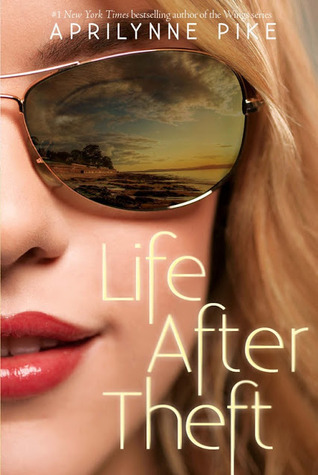 What's with all the hate for Aprilynne Pike? I got this book from a little free library because I liked the cover and the title made me laugh and then I got a nasty shock when I looked at the reviews and saw that practically alllll my friends hated it. I was worried but not that worried because everyone on my flist felt the same way about her other book, GLITTER, which actually ended up being a really fun and frothy escapist read for me, so I was kind of hoping for samesies.

LIFE AFTER THEFT was not the book I was expecting. The narrator is a teen boy named Jeff who is new to this rich wealthy school. On his first day, he catches the eye of this beautiful, not-so-nice girl, only to find out that she's a ghost and for whatever reason, he's the only one who can see her. It also turns out that she was a total kleptomaniac and not a very nice person and she has a whole cave full of all the stuff she stole from people. She thinks that if she returns everything she took, she'll get to move on from ghosthood and she wants Jeff to help.

It sounds silly but I actually really liked the premise and I think maybe the reason it flopped is because it came out at the tail end of the "dead girl" trend prompted by THE LOVELY BONES that included books like BEFORE I FALL and IF I STAY and various other titles. Some things that make this stand out are the fact that it's narrated by a boy-- Jeff-- who is actually a pretty nice guy, and Kimberlee is a total BITCH but she still has some redeeming traits which actually make her weirdly relatable.

I read this in a day. It had some slow moments and it was definitely a YA book in tone, but also-- it's YA. I can't really fault it for that if it tells a good story, and it did. Mystery, a little bit of a romance, and tons of high school drama. If you're into that, you'll love this. The ending even made me choke up a bit.