Until the End by Christopher Pike 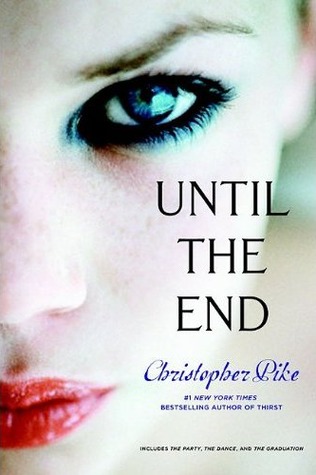 UNTIL THE END has been sitting on my bookshelf gathering dust for years until I finally decided to purge my bookshelves of some of my old YA and middle grade novels (I'm more interested in mystery and romance these days). But because I'm compulsive as fuck, I figured what better way to give these a final send-off than to binge-read everything I can get my grubby hands on? If I don't like it, I DNF. Either way, a winner is me.

This trilogy is a repackaging of Pike's 90s thriller trilogy, The Final Friends. I was really pleasantly surprised by these books, to be honest. I was expecting the usual Point Horror-esque cheap thrillers and instead I found myself being sucked down a rabbit hole of sex, violence, school rivalries, and madness, with a locked-room mystery premise to boot. How did I miss this series growing up? I would have LOVED it. Deadly parties are one of my FAVORITE tropes.

I don't think I've binged a series so fast in a while and these books are relatively young for pulp YA. My omnibus edition was 800+ pages and I finished it in TWO. DAYS. Books two and three I read back to back in one day. That's how badly I wanted to find out what happens. Because Pike does something truly evil. Book one doesn't give you any closure. Neither does book two. To find out the identity of the murderer from book one, you have to wade through the drama of all three books.

But I think the wait is worth the pay-off. The characters are all fleshed-out and interesting (for pulp) and I liked that the author actually lets the teens do bad teen things, like underage drinking or relationship drama. These teens are not squeaky clean and aren't afraid to let you know it. A lot of these teen pulps feel really old-fashioned and use 50s slang, because I think the authors writing them were probably teens themselves in the 50s, so they refer to dances as "hops" and frequent malt shops and have ice cream socials. These teens want to party and get laid, which makes the books feel more modern, although I must say that there are some pretty serious trigger warnings across the board for virtually everything, as this series touches upon subjects like abortion, self-harm, and racism.

It's like no other vintage YA I've ever read before and for that alone it would have probably gotten a pretty positive rave from me, but I like that it had such a compulsively readable storyline, too.