7 Days and 7 Nights by Wendy Wax 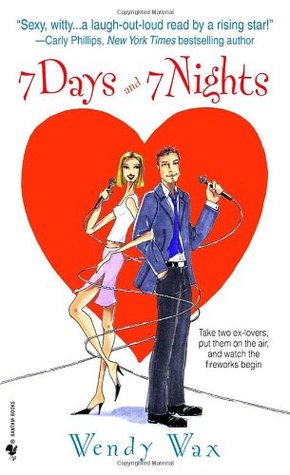 Once again, I'm shocked by the low ratings for this book because it's like a cross between How to Lose a Guy in 10 Days and THE HATING GAME, which are probably two of my favorite rom-coms. Olivia is a radio therapist who counsels women through breakups and relationship problems despite being unlucky herself. She's divorced and had her heart broken at 21 by a guy who wasn't as into her as she was to him. Her competitor at the radio station is said heartbreaker, Matt, one of those hypermasculine dudes who probably self-describes as an alpha. He has a show called "Guy Talk" where he does the same thing as Olivia, basically, only with lots of sarcasm and insensitive remarks.

When their radio station's funding gets tight, their producer decides one of them might have to go and kind of sets them up to compete against each other. But then another solution presents itself: shutting the two of them up in a tiny apartment with a Webcam and having them host their shows with tons of endorsements from sponsors, while waiting to see if the two of them kill each other. Whoever gets the highest ratings will get to stay on air, and all the donations they manage to get from their callers go to benefit disaster relief. It seems like a win-win-win.

This is early 2000s chicklit which can sometimes be really toxic, but except for a lot of remarks about how old Olivia is at thirty (something I couldn't help but take offense to, as I resemble that remark), it was actually pretty fresh. Matt had a pretty sad backstory himself and even though it wasn't an excuse for his fuckery, I liked that he actually had to change. Olivia was a great heroine and had a lot of spine and some great one-liners. The love-hate chemistry between her and Matt was fantastic and there were some pretty spicy sex scenes in here, all very well-written. There's also a secondary romance between two of their callers, a waitress named JoBeth and an ex-football player named... Dawg.

Even though this could be silly at parts, I really, really enjoyed 7 DAYS AND 7 NIGHTS. It feels like it could be a movie; everything is so cinematic, and all of the characters had such distinct personalities. The reality TV angle and the radio host jobs were fresh and different from the legions of other chicklit that all had the heroine working in PR or as a secretary, and it was nice to see a romance from this time period that didn't sink too deeply into toxic gender stereotypes. I would 100% read more from this author!