Snowflower and the Secret Fan by Lisa See 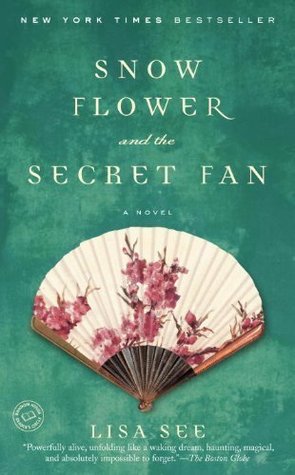 I'm doing a project where I reread some of the books I enjoyed in my teens and adolescence. SNOWFLOWER AND THE SECRET FAN is one of those. When I read MEMOIRS OF A GEISHA as a teen, I enjoyed it so much that I immediately started seeking out similar books and some of the authors that were recommended to me by... someone-- a librarian? a teacher? my mom? I can't remember-- were Anchee Min and Lisa See.

SNOWFLOWER AND THE SECRET FAN is an incredibly powerful story about the relationships between young women and how fraught with tension and conflict they can be, in addition to feelings of undying devotion and betrayal. The book is set in the 1800s when foot-binding still happened in China, and the descriptions of these events were so hideously visceral that I remembered them ten years later. Even with so much time to buffer my memories, I was still shocked and horrified anew.

Snowflower and Lily, the heroine, become laotong, which sort of seems to be similar to the "bosom friend" espoused by Anne in Anne of Green Gables, except it's arranged by a matchmaker. Lily and Snowflower undergo foot-binding together and learn nu shu, which is a language spoken and written exclusively by women, which I found fascinating. The intimacy between the two girls borders on the erotic at times and it's clear that the love they feel for each other supersedes anything they feel for their husbands or families, which is why, when the inevitable betrayal happens, it feels so cutting.

This is not a happy book, but it is a story about relationships and redemption. I think I actually enjoyed it a little more than MEMOIRS OF A GEISHA in hindsight because that book was basically a Western Cinderella story done up in Japanese costumes (not surprising, considering who wrote it), but this book was entirely female-focused and didn't really have much romance in it at all. Lily's husband doesn't really feature except when relevant to the plot and we don't learn his name (Dulang) until the end. A lot of books like these tend to be very love story-driven, so the fact that Lisa See chose to make it focused on female friendships and female agency made it feel very powerful to me.

Bear in mind that if you choose to read this, it deals with a lot of unpleasant subject matter-- foot-binding, child abuse (or what would be considered child abuse in Western, modern culture), wife beating/spousal abuse, miscarriage, death of a child, graphic medical gore, etc.

I enjoyed this book enough that I just bought PEONY IN LOVE.