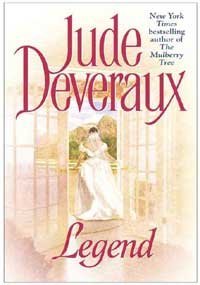 Whaaaaaat the actual fuck was this book. I don't think I've ever had my thoughts change about a book so often, so fast. Jude Deveraux is one of my go-to authors for cheery fluff and when I found out that this was a time travel romance, I was super excited because that's kind of my guilty pleasure. It starts off as kind of like a softer, sweeter version of OUTLANDER but set in the old West, but then it gets... really, really, REALLY weird. I'd say it was the weirdest time travel romance I'd ever read but that honor goes to Robin Schone's AWAKEN, MY LOVE. But this was a really close contender.

I really need to tell you the summary with spoilers so you understand how utterly ridic this was. Kady Long is an acclaimed chef who started working at a run-down steakhouse called Onions and ended up putting it on the map. Now she's about to marry the son of the owner, a man named Gregory, but she's starting to get nuptial jitters. Maybe it's because of her bad body image or maybe it's because her fiance seems so distant and remote, but whatever it is, it's there.

While buying accessories for her new home, she goes to an antique store and impulsively buys an old flour tin. There's a vintage wedding dress inside and when she tries it on, she gets dizzy and ends up in the past where there are these magic petroglyphs that kind of reminded me of the stone circle in the Outlander series. She finds herself in the Old West in the 1800s and saves a man from being hung. The man is named Cole Jordan and he takes her to a picturesque town called Legend. She ends up marrying him when she can't get a job or find anyone to help her but then it turns out that rather than being the poor outlaw she thought he was, he's a multimillionaire who owns the whole town. To punish him, Kady enlists the whole town in preparing lavish feasts on his dime.

But then... it turns out that she kind of imagined the whole thing? Because Legend is actually a ghost town, as she finds out when she meets Cole's grandmother, Ruth. Ruth destroyed the town by cutting off the finances after her entire family was killed in gunfire. She also had grief sex with the father of Cole's family friend while he was dying and had an additional son in her late forties?? And it turns out that Legend is the dream of a dead nine-year-old Cole who is a ghost and haunting the town? So the Cole that Kady met and married is only his "dream" idea of what he would have been like as a man.

Anyway, Kady goes back to the present and realizes that Gregory and his mom were basically using her as a wage slave and also he was cheating on her. She breaks up with him and hunts down Ruth's descendant, who it turns out is the spitting image of the man on horseback who has been haunting her dreams. Also he's one step removed from a sheik fantasy because the friend Ruth slept with was Egyptian, although the book keeps referring to him as Arabian. Anyway, they go back in time together and the descendant, Tarik, stops the shooting that massacres all of Ruth's family, thus changing the future so that he becomes even MORE rich than he already was and everyone lives happily ever after.

This was honestly such a bizarre story. I've read quite a few Deveraux books and none of them were this weird. In fact, I found them all to be refreshingly straightforward for the most part with some really great character development. This was just... SO WEIRD. It's like something I would come up with while having a fever dream and I... well, I just can't hate it for being that weird. I went from thinking it was a fairly straightforward sweet story (three stars) to a more complex story with some interesting morality components (four stars) to leaning back in my armchair, two glasses of wine deep into the game, thinking, "Where the fuck is this going to go next?" (three stars again, but also maybe one).

In the end, I ended up liking this because it was such a clusterfuck. It's a fairytale for adults with no rhyme or reason and I'm kind of admiring the balls of the author to just do whatever she wanted, logic be damned.