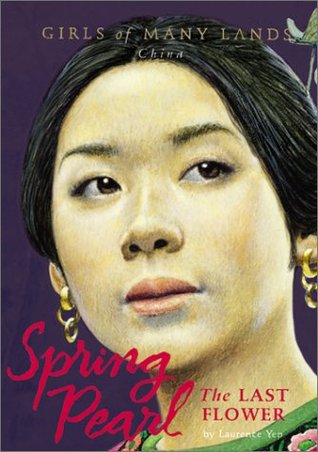 Set during the First Opium War, SPRING PEARL is the story of Chou Spring Pearl, a twelve-year-old orphan who was the daughter of an artist/scholar and a seamstress. She is sent to one of her father's friends, Master Sung and his wife, and their three daughters and one son. At first, the wife and daughters are resentful, and Pearl feels homesick and out of place, but she quickly begins to show how useful she is with her gardening abilities, English skills, and neat penmanship.

When war breaks out, things quickly become chaotic. Master Sung is arrested as a traitor and looters run amok in the streets. Pearl tries to protect her new family to the best of her ability, but nothing reduces the differences of class like revolution, and the more she learns about the Sungs, the more she grows to like and respect them.

This was a really great story. It almost has Cinderella undertones. I liked how history was incorporated into the story and all the little details about Chinese culture. I see that it is published by American Girl publishing, and that was especially nice because most of their characters were white, so it is nice to see them branching out and trying to be more diverse, and especially being diverse by hiring authors of color to write these stories rather than giving them to a white person.

Pearl is twelve but she feels much older. SPRING PEARL is the type of middle grade I really enjoy because it doesn't condescend to its audience. I think even older readers would enjoy this book if they are fans of history, especially if they like books like the Dear America series.