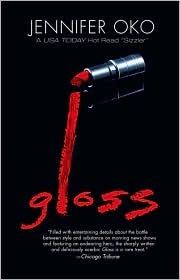 GLOSS really only scrapes at the surface of what it could have been, and I'm not sure if that's because of when it was published, or how it was packaged. I loved the beginning. The heroine is a reporter who ends up over her head when the feel-good puff piece about makeup she's writing ends up being the cover-up for a terrorist organization.

There were a couple things about this book that didn't really work for me. It starts out in first person, but then it switches to third person in some parts for expositional reasons, which I didn't really like. The author also makes up a fake Middle Eastern culture, "Fardish," which is another peeve of mine. A lot of romance novels do this and I suspect it's so nobody gets pissed off, but it also just kind of feels like a lazy cop-out to avoid doing any cultural research. I also felt like the plot began to get pretty ridiculous. As soon as terrorism entered the mix, I was like "oh no." It turned into a shark-jumping extravaganza.

I thought the analysis of newsroom politics was very interesting, very Anchorman, and I originally liked the heroine's voice and how she had kind of grown jaded with her career. Usually I love stuff published by Mira-- they are so good at finding romantic suspense stories-- but this was just too much.