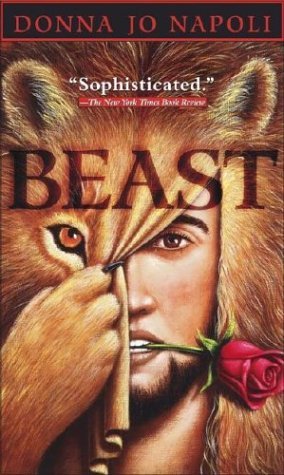 How did I forget the weird animal sex?!

I read BEAST when I was a teen and all I remembered about it was that it was a book written entirely from the Beast's view. Orasmyn is a prince of Persia and unlike the Beast from most faerie tales, he isn't all that much of an asshole. He's just proud and arrogant. He is cursed by a djinn when he sacrifices an imperfect animal for the Feast of Sacrifices, and is told in a vision that the next day his father will kill him. When Orasmyn wakes up, he is in the body of a lion on the day of his father's big hunt.

So, I had a lot of THOUGHTS while reading this book. I feel like in making Orasmyn not that bad a guy, the original meaning of the story was lost. There's also weird animal sex. While in the body of a lion, Orasmyn has sex with two lionesses. Somehow the last time I read this book, I forgot all about the animal sex. He also becomes even more of a jerk while in the body of the lion. I get that he's frustrated and upset and he's fighting against the instincts of a lion, but I was still sad when he turns on his pet fox and the relationship between him and Belle feels way more Stockholmy than it usually does in these types of stories.

Which brings me to my next point: there's no real emotional connection between Orasmyn and Belle. Some Beauty and the Beast retellings manage to sell that bond and while most of it is Stockholmy, some authors manage to make it work. This does not. Especially since, as a lion, Orasmyn can't talk, he is an actual lion, so when Belle says she loves him, it feels... I don't know, as wrong as a lion orgy? I actually really enjoyed the parts of the book where Orasmyn is just being his lion self and wandering around but when Belle appears suddenly the narrative speeds up and everything is so abrupt.

Last night I was debating about maybe giving this a 3.5 or a 4 but now that I'm listing out all of my thoughts, I'm realizing that I was more weirded out by this book than I thought I was. It's not a bad book but it's definitely one of those niche stories that seems to defy categorization. I thought this was middle grade and-- oh-ho-ho-- it most certainly is not. I'd recommend this to older teens, probably, who enjoy those "out there" fantasy writers like Angela Carter and Tannith Lee.