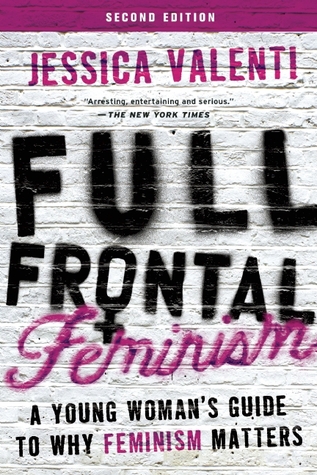 Officially I stopped at p.35 although I did some skimming through some of the other chapters. I liked the author's other book, SEX OBJECT. Even if I didn't always agree with all of the finer details of what she was saying, I agreed with the overall tone and message of her book. The same thing happened here, with this book, only the tone was even more off-putting. In an attempt to sound hip, Valenti adopts this strange, snarky narrative that I think is supposed to sound relatable, but instead comes across as patronizing and overly casual by turns. Maybe teens will relate to this better? Or they did in 2007? I see that it was originally published in 2007, and the humor-- or what passed for it-- back then was definitely more in your face than it is now. It's my opinion that she cherry-picks her arguments and picks straw-men (and women-- strawpeople?) to systematically attack and deconstruct the other side's arguments. And maybe that's to simplify the nuances of her arguments for teens but it also made her opinions look cheap. Especially since her brand of feminism comes across as the sort of "I can have tons of sex and wear lipstick and short dresses and OWN it" feminism that seems to prevail among white affluent cis/het women. There were attempts at intersectionality although she said a few things that made me side-eye her (for example, saying that the worst thing that you can call a guy is a "woman" and including "gay" on that list of womanly perjoratives, thereby accidentally implying that all gay men are femme/womanly) and some outdated statistics even in the updated edition. For example, she says (in this 2014 reprint) that 56% of Americans oppose gay marriage but I believe that at the time that this was published, that was starting to shift. I just checked a Gallup poll and it looks like 70% of Americans now approve of gay marriage. Granted, 2014 was seven years ago, and the internet forces social change faster than anything, but 56% of disapproval feels low for 2014. It felt more like a 2007 statistic that never got updated. The tone of the book gets less obnoxious towards the end but I was not a fan. I think this could be a good jumping off point for teens who are curious about wanting to know more about feminism but I'm concerned that the edginess of her "humor" might put people off. I'm not one for tone policing and I am a feminist, and I can see what Valenti is trying to do here, but I'm just not sure her message is going to resonate for anyone except those who already solidly agree with her.