After All These Years by Susan Isaacs 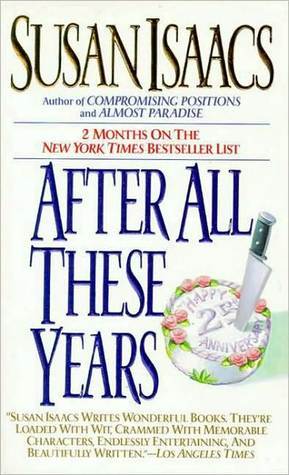 This book was in a box of books someone gave me. I'd never heard of this author before but when I read the summary and the first couple pages, I was instantly intrigued. Rosie Meyers is a school teacher in a WASP-y New England town, married to a tech magnate named Richard. Richard used to be a teacher and a coach until he made it big and now they're millionaires several times over. It was a surprising success for two such humble people and Rosie looked forward to sharing it out together over the rest of their lives, which is why it came as such a brutal shock when, shortly after their 25th anniversary party, he announces that he's leaving her for a younger woman.

When Richard turns up in her kitchen, murdered, everyone-- her friends, her enemies, the police-- all assume it was her. But Rosie knows she didn't do it. And she knows that if the police arrest her, it'll be case open, case closed, letting the real killer walk away. So she decides to run and take matters into her own hands. What follows is a really entertaining story narrated by Rosie's scathing wit. It's got everything the popular mysteries and thrillers coming out these days in droves have-- sex, intrigue, and drama-- but it did it about twenty years before it became so popular.

This was definitely a trashy read but in a really fun way. I saw a couple reviewers saying that the killer was obvious, but it wasn't obvious to me. Maybe that means I'm dumb, I don't know, but I was surprised as anyone when the reveal was dropped. I also liked that when it does happen, it happens old school, locked-room mystery style (a personal favorite trope of mine). The satire of the American rich is really well done and I loved how fucked-up all the relationships in the book were. The nearly-fifty heroine also gets down and dirty with a twenty-something, which was kind of fun. You get some!

If you enjoy campy thrillers that are light and kind of chick-litty, you'll really love this. I did!