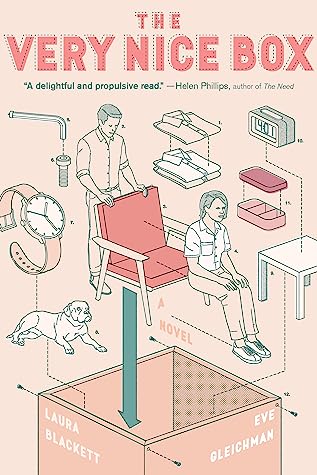 Wow! THE VERY NICE BOX was an ARC I accepted purely on impulse not really knowing what to expect-- and honestly, that's the best way to dive into this book. It starts off as one type of story and gradually becomes something else and I really don't want to say too much more than that because the surprise is half the fun.

I will say that THE VERY NICE BOX is kind of a funny, tongue-in-cheek satire of start-ups and tech culture. STADA, the company in this book, is an obvious parody of IKEA. Ava, the heroine, appears to be neurodivergent and she is suffering from grief and PTSD. Several years ago, her family and girlfriend died in a hit-and-run accident and she's closed herself off from everyone else as a result. When the marketing company hires a guy named Mat who's a total extrovert/people person, she rolls her eyes along with her friend because of how utterly obnoxious and upbeat he is--

Until she falls for him.

There are so many layers to this book. I kind of predicted one of the main twists pretty early but that didn't stop me from liking the book anyway. The characterization was really well done and so was the humor and the story. I also liked that there was a bit of a mystery, as well! Also, Ava is such a great character. Her introversion and grief were really well done and I liked how she stayed consistent to herself throughout the whole book. I love seeing STEM heroines in fiction, especially when they are portrayed as strong and having agency. This would make a great movie and I hope to one day see it on the big screen. It really is that good.