To Catch a Pirate by Jade Parker 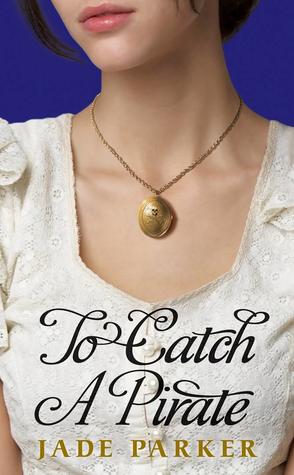 When I found out that Jade Parker was the YA pen name for romance author, Lorraine Heath, I bumped this way up my to-read list. I don't normally go in for the fluffy set, but Lorraine Heath, along with Jude Deveraux, is an author who has yet to disappoint me. It would be like finding out that Lisa Kleypas had a secret line of young adult mysteries (although as far as I know, she doesn't); I'd be all over that like white on rice. You gotta support your faves.

TO CATCH A PIRATE starts off intensely. Annalisa is aboard her father's ship delivering some of King George's gold to build a board when they are attacked by pirates. Held at knifepoint, the pirate is about to steal her mother's necklace, and maybe her tongue, but he settles for her ring and a kiss-- and the king's gold.

One year later, Annalisa's father is thrown in jail for conspiring with pirates. Determined to clear his name, she has counterfeited a marque and set out as a privateer to arrest and interrogate James. James, on the other hand, was marooned on a deserted island as punishment for accepting a worthless ring as payment and falling for a pair of pretty eyes. When he is captured by Annalisa, he finds himself intrigued by her anew-- if there's one thing a pirate likes, it's danger.

This is part of Scholastic's Point imprint. Not many people know that, in addition to horror, they dabbled in romance as well. This is YA so there's mostly just kissing, but there is sexy kissing and sexy swordfighting, as well, and there is a surprising amount of action. Mutinies and public floggings and seedy New Orleans taverns. After reading THE TRUE CONFESSIONS OF CHARLOTTE DOYLE, I found myself thirsting for more adventures on the high seas, and this book really delivered. It doesn't have that irritating "YA" tone that a lot of the books coming out these days have. Maybe it's because Heath is so used to writing adult romances that she doesn't condescend to her audience at all.

If you're looking for a light romance, and you like reading about pirates who aren't rapey, I think you'll really enjoy this book. It's got dangerous boys, lots of kissing, and a strong heroine who doesn't take any shit. The ending was satisfying and I wish I'd read this when I was a teen. I think I would have loved it even more than I did now, reading it for the first time as an adult.