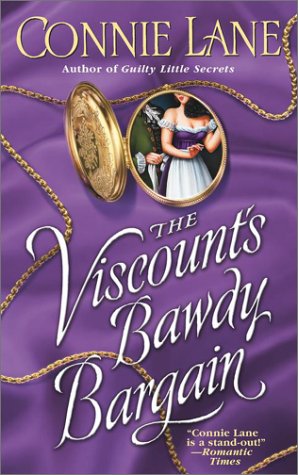 I got this book in one of those historical romance mystery boxes and I'm honestly shocked at how few reviews it has because this is the perfect romance for anyone who enjoys those light-but-not-too-dumb historical romances in the vein of Lisa Kleypas, Julia Quinn, and Jude Deveraux.

Willie is the daughter of a crazy preacher who wants to marry her off to this horrible man in India. The hero, Nicholas, is a viscount who runs with a not-so-gentlemanly club that likes to carouse and make wagers. Their most recent bet is to procure an astounding sight in competition with another club. They produce a guy with a baby elephant. Nick, however, produces a virgin: AKA, a very kidnapped Willie.

Nick wins the bet but Willie ends up compromised, and his staff deserts him in disgust, resulting in Willie ending up serving as his chatelaine while he tries to procure a replacement. Eventually there's another bet that Nick will get one thousand pounds if he finds a wife by X date and Willie helps with that, too, only to have every encounter go sour for one reason or another. Which she's secretly happy about because she's rather attracted to him, too, not that she'd ever admit it.

This is very well-written and features a big cast of fun characters. Nothing happens that is too dark or edgy and the sex scenes are well-written, consensual, and hot. In short, this is everything that most of my friends of modern romances love, which makes it even more tragic that none of you seem to have heard of this romance OR this author. I would give it a higher rating but it moved a little too slow for me and I found the middle portion tedious. But I'm not a huge fan of fluffy romances, so the fact that this book made even my cold, dark heart elicit a pitter-pat speaks greatly in its favor.

Definitely a feel-good romance if I've ever read one!