Lords of Wrath by Angel Lawson 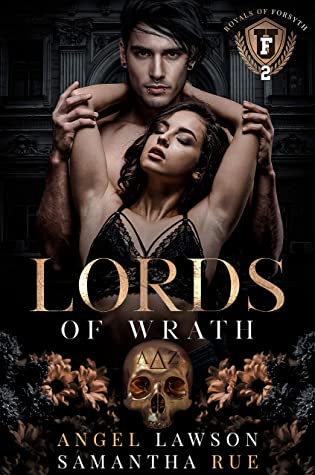 Okay, so after I read LORDS OF PAIN by Angel Lawson and Samantha Rue, I had a lot of thoughts. Like, oh my God, why am I reading this? And, why do I want more? And, what kind of literary cocaine did the authors inject into this book to even make me like a story that has so many tropes I hate? I don't like reverse harem and I don't like caveman alpha heroes, I don't particularly like crime/mafia stories, and I hate stories that fetishize virginity/purity, so the fact that this book had all of those elements and I still enjoyed reading it made me feel like I should call shenanigans.

And yet, here I am. Champing at the perverted bit.

To be honest, I wasn't really sure what the authors were going to do with the story. It's a really weird story where frat boys act like mob bosses. The Lords of this story are one such frat and the girl they have chosen to be their live-in prostitute/sex slave is the stepsister of one of the boys, Killian. The other two, Tristian and Rath, helped sexually assault her when she was underage. So now that she's legal and still a virgin, they're like YAAAASS. And it's still really, really gross.

Story, the heroine, was really hard to relate to in the first book. She made all kinds of questionable decisions and felt like such a victim. I felt really sorry for her but she really didn't have a lot of agency as a character, and she was veering too close to one of those heroines in dark eroticas that just sort of takes everything thrown at her at the cost of her self-respect. I don't deny that this can happen in real life situations but it's not fun to read about and doesn't make for a good romance. So I was REALLY fucking happy that the glimpses of occasional maliciousness we saw from Story in book one took hold in book two and she becomes a one-woman revenge act who's ready to fuck things up. It was a total 180 in character development but it also made sense and I just loved her character so much. Her revenge was brutal, too. One of them actually made me gasp. I was seriously impressed.

Regarding some of the negative reviews for this book, I can totally understand why people wouldn't like this book. It's basically a modern-day bodice-ripper. There's rough sex, torture, dub-con, cult-like situations, abuse, and violence. Things get DARK in this book and really bad things happen to the hero and the heroine. I was actually expecting way worse because I've read things like SWEET SAVAGE LOVE or BLEDDING SORROW, and apart from having more graphic sex scenes, this book really didn't have anything that shocking if you're familiar with old skool romances. Hell, I can think of three bodice-rippers right off the top of my head with graphic torture and one where the hero gets castrated (partially). So, you know, I'd say that this looks like a puddle of sunshine in comparison.

I loved it, though. I tolerated the first book and appreciated it the way you appreciate movies like Glitter or greasy hamburgers, but this second book was a much more polished and sophisticated work because it had real emotional development and character-building arcs, tons of suspense, and some REALLY intense scenes that added drama and kept me turning the pages. I could have probably read this a lot faster than I did but part of me also wanted to save it so I could keep enjoying it.

So yeah, if you like dark reads and have a high tolerance for WTFery in your romance books, read this book. I roll my eyes at a lot of the so-called dark romances out there but this one actually fits the bill. Even if you do feel like you and your browsing history need a severe and thorough cleaning after.