Night School by Caroline B. Cooney 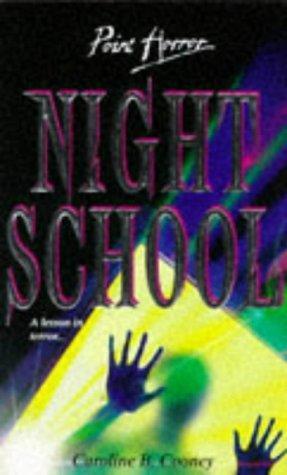 I read a LOT of Caroline B. Cooney growing up but there were still some titles that eluded me. One of them was NIGHT SCHOOL, which really intrigued me because as a night owl, part of me has always kind of secretly wished that school could be at night so I could sleep all day. But this is NOT an insomniac's utopia, no. The night school described in this book is actually... sinister.

When a notice appears on the school bulletin board inviting people to sign up for Night School, Mariah, Ned, Andrew, and Autumn all feel compelled to write their names on the list. All of them have secrets. All of them are hoping to get something out of the night class. All of them have something in common. When they get to the school at night, they discover that their instructor is sinister and so is his lesson plan. At night class, they learn to become one with the dark-- and scare the shit out of people.

The powers of the instructor are actually pretty similar to those of the vampire in her vampire trilogy and so is the way his smile is described. The plot is also very similar to the plot of Fatal Bargain, the last book in her vampire series, where teens basically spend the whole time talking about people to sacrifice. Because that is what people do in night class; they feed off of people's terror by exploiting their fears.

I liked the book okay but I felt like it was anticlimactic in a lot of ways. I kept expecting Mariah's big humiliating secret to be blown or for her to have to save her brother. It felt like the author was foreshadowing something like that but it never went anywhere. Then what happened with Andrew at the end totally came out of left field. Autumn seemed more like she might be the weak link. I felt like that should have been foreshadowed more, too. And as others said, the ending is abrupt.

This basically does what her vampire series does, only not as well.