It Came From Ohio: My Life As A Writer by R.L. Stine 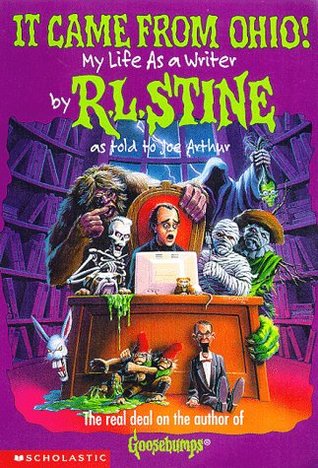 I remember reading this book in middle school. Back then I wasn't so interested in nonfiction but I was very interested in R.L. Stine and since I wanted to be a writer even back then, I wanted to find out more about one of my favorite writers at the time and how I could be more like him. Reading this turned out to be a very interesting experience because apparently this book has been revised and updated since its initial 1997 publication. The updates include new pictures of his family, details of his trip to Moscow with First Lady Laura Bush and a trip to China with his wife for a book tour, and a few behind the scenes details on working with Jack Black for the Goosebumps movie.

I don't recall if the original memoir was ghostwritten but apparently this new version was written by his childhood friend, Joe Arthur. It definitely reads like Stine, though. I still remember his tongue-in-cheek intros in the beginning of every Goosebumps TV episode. The tone of the memoir is definitely for kids, and has that chatty, friendly tone that people use when talking to children. I didn't mind it in this instance but it's clear who the target audience is (i.e., not me).

I learned some really interesting facts while reading this book. Like that his then-teenage son, Matt, was the cover model for his book, THE PERFECT DATE. Or that the actress in The Mask insisted on eating a real worm in the sandwich for the prank to make it seem more real, and did so on the 10+ takes they shot (eek). He also confirms several things that I always suspected: that Silent Night I and II are among his favorite books to write (he's REALLY good at writing mean queen bee characters) and that Tower of Terror was inspired by the Tower of London (which you would totally know if you'd been there, like I have-- on my visit, I was thinking about R.L. Stine's book the whole time). Before writing horror books, he read some authors for inspiration and one of them was Christopher Pike. He also worked on the children's TV show, Eureka's Castle, which I also watched as a kid. LOVE.

I was reading this out of nostalgia so it was kind of a fun surprise to see that there were so many new things added to it. R.L. Stine is very hit or miss with me now but he was a childhood favorite and probably set me on the path to writing the dark erotica that I mostly do today. I loved his books and TV shows so much and he has brought a lot of children scary joy. There's a reason he's regarded as the Stephen King of Children's Literature. If you are or were a fan of his, you should read this memoir, too.