The Cows by Dawn O'Porter 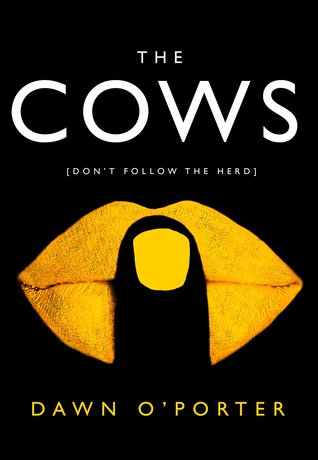 My mom brought this book back from me when she went to the UK. I thought it looked really interesting despite the ugly cover (sorry, but it is ugly, okay?) and did what I do with 80% of my books: put it down somewhere and forgot I owned it. While cleaning out my shelves, I happened across it again and decided to give it a read. Almost immediately, I was sucked into the story and it was giving me ALL THE FEELINGS, good and bad. I wished I'd read it sooner.

THE COWS is a chick-lit book that is unlike other chick-lit books in that it doesn't play to the usual stereotypes. The women are allowed to be unlikable and non-traditional; they aren't peppy caricatures of girlhood. Tara is a TV shark and a single mom whose life is derailed by a moment that goes viral. Stella is the PA to a photographer and working through grief of her mother's and twin's deaths to cancer. All three of them have the BRCA gene and she wants desperately to have a child before having her breasts and uterus removed. And then there's Cam, a lifestyle blogger who's single and child-free and loving it. All three of their storylines end up intersecting in an interesting and unexpected way that had me white-knuckling the book.

Not only is the story good, I think it has a really great message. I loved Tara and Cam and I REALLY fucking hated Stella, but I can see why the author chose to wrote them all the way she did. Society really does place unfair standards on women. I related to Cam the most because, like her, I'm a blogger who can come off as charismatic online but is actually quite anxious in person, and I also am uninterested in having children. When you have a platform like that, I think there is an expectation that, as a woman, you portray a universal experience of womanhood. But you can't be EVERYTHING, and when you fail at that, people lash out at you for not being who they want you to be. That parasocial interaction and how quickly it becomes toxic is really played out intensely in THE COWS, how having a public persona makes people feel entitled to you and your spaces, and you almost start feeling more like an abstract and less of a person. It was done SO well here that it was honestly chilling.

Tara, on the other hand, is the perfect example of internet shaming gone awry. Her story kind of reminded me of that woman who tweeted the AIDS joke while on a plane and then had people tracking her flight number gleefully, waiting for her to find out that the whole world had declared her Public Enemy of the Day. She was the character I think I really felt for the most and I loved her interactions with her daughter and how she really fought hard to be taken seriously, as both a single mother, and as a social pariah. Motherhood can take many forms and there is no one right answer, and I felt like the author had a lot of things to say about that subject too that were all fairly empowering.

As for Stella, I think she's the epitome of what sometimes drives trolling on the internet. Happy people don't usually make it their business to ruin other people's lives. She behaved abominably and selfishly and I wanted to strangle her for it, but she was such a troubled character with so much shit being flung in her direction that it was hard not to feel sorry for her a (very) tiny bit. The ending with her storyline maybe wasn't the vindictive finish I was hoping for, but I guess that is kind of the moral of this story: we, as a society, feel far too comfortable persecuting women for not conforming to society's standards and leaving them at the mercy of mob justice. So I guess in that sense, I felt satisfied.

This is such a smart and intense book. I hope they make it into a TV mini-series. I feel like it would appeal to the same sorts of audiences who enjoyed Big Little Lies.