A Winter's Rose by Erica Spindler 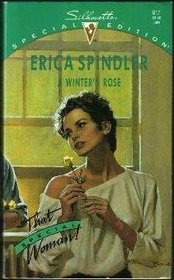 Erica Spindler is a new-to-me author and I REALLY like her mysteries and thrillers. I think I've read two of her mysteries and a Jackie Collins-esque potboiler called RED that was pure brain candy. I'm pretty picky so when I find an author who vibes on my wavelength, I get excited and basically hunt down their whole backlist.

I guess before she really made a name for herself as a thriller writer, she also dabbled in romance. Looking at her BL, I see that she had a couple of these Silhouette romances. This one is about an heiress who decides to cut ties to her wealthy family after her divorce in a quest for independence. But her mother has basically "bought" her a new job and the man, Jackson Reese, is resentful, so he decides to offer the humiliating position of being a nanny to his bratty thirteen-year-old despite knowing that she's angling for more professional work.

After reading Spindler's more recent efforts-- especially SHOCKING PINK-- I just couldn't get into this one. I could see her style evolving, as well as her ability for characterization, so that was cool, but the story just didn't resonate with me at all.