Why Social Media is Ruining Your Life by Katherine Ormerod 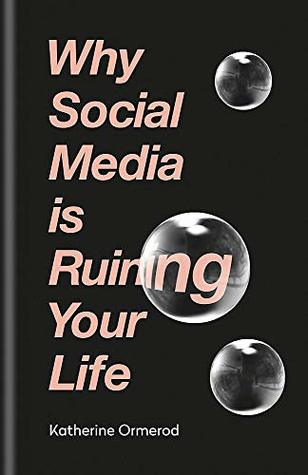 Click-bait title aside, social media is becoming a huge dependency for some individuals. In a society where many of us are feeling increasingly isolated and despairing, living your life through a screen and celebrating conspicuous consumerism act as a balm for both loneliness and personal inadequacy. It's chillingly reminiscent of the soma used in Aldous Huxley's BRAVE NEW WORLD, which kept the oppressed population subdued and pacific. So many of us use social media every day, if not every hour, and it's so easy to get lost in the massive ocean of data. So easy. This book is about how not to get lost-- or, if you do get lost, how to find your way back.

WHY SOCIAL MEDIA IS RUINING YOUR LIFE covers a wide away of life-ruining topics, from motherhood to debt to politics to depression, and in each of these essays, Katherine Ormerod says why, exactly, social media is exacerbating existing problems, and what we can do to combat it or at least be aware of the effects. I became interested in this book when I watched the author's TED talk by the same name, which seems to be modeled after her essay about "career and money." On the one hand, it's a bit difficult to take her seriously because you have this posh and glamorous looking woman with an Instagram feed drowning in privileged lifestyle telling you that her life isn't actually as awesome as it seems--and yet, that's the point, isn't it? As awesome as her life looks-- and as awesome as the lives of most influencers look-- you never get to actually look behind the curtains. Because if you saw the struggle, strife, and unpleasantries behind each carefully curated photo, all the magic would be gone. Even so, it's hard not to roll your eyes.

Reading this book was very personal to me because I've been fairly active in the blogging community for 10+ years, and during those early years, I was very depressed. I've actually stopped using a few platforms because I couldn't help but compare myself (unfairly) against others, and feel like I'd fallen short. In 2016, I actually deleted thousands of reviews written over a seven-year period because I wanted a fresh start, and also, I wanted to prove to myself that I could; that I wasn't so dependent on social media that I couldn't pull a Marie Kondo on the content I'd written that wasn't sparking joy, and was in fact making me feel worse about myself. It was probably one of the more difficult and weighty online decisions I ever made, but I did it, and it made me a lot happier. I've worked very hard to be authentic and consistent in what I say online, and when that content was no longer representative of who I am and what I believe in, I elected to remove that content.

The only thing I didn't really like about this book was the political section. In each segment, you see, Ormerod interviews various influencers and YouTubers to get their hot takes for each essay, and most of the people she interviews are good, but the political section fell short. I felt like the author was out of her depth, and didn't like the person (whose name I can't remember) griping about TERFs, and how discussing the exclusion of transgender people from (I'm assuming cis-gendered) woman's spaces automatically makes you a TERF. Well, it kind of does? That's basically the definition of it, to a T. Not really sure what there is to discuss about that. This whole section felt incredibly uninformed. I'm not super active in politics, but I wasn't impressed with the half-cocked mentioning of TERFs and Brexit, because those aren't things you can just drop and then not diffuse; they are sensitive topics.

Overall, though, I really did like WHY SOCIAL MEDIA IS RUINING YOUR LIFE. I actually think this book should be required reading for high school students, as it brings up a lot of topics I don't think people (of any age) necessarily think about: that influencers have a self-serving motive in what they post, that if the site you're using is free you're probably the product, and that it's easy to make false comparisons between yourself and others when it comes to perceived haves and have nots. To some extent, the internet is the biggest fantasy role-play of all time, and how much you choose to participate or believe in it is really on you-- and it's okay to step back if it gets to be too much.