Good Talk: A Memoir in Conversations by Mira Jacob 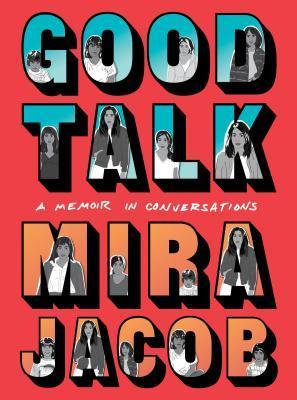 I wasn't really sure what to expect with this one but I ended up liking it a lot. GOOD TALK is a graphic novel memoir told in conversations. The art is static, set against photographs or hyper-realistic drawings, and at first this kind of felt lazy to me and I wasn't sure I liked this style, but I realized it was probably so the art wouldn't be a distraction from the text panels since that was the important stuff. The conversations are mostly between Mira and her young son, Z. Z has lots of questions, especially about what it means to be biracial and brown in a post-9/11, post-Trump political climate, where so many people in the United States still have biases.

One of the things I ended up loving about this book is the raw honesty. Mira's dating life shines light on a lot of the difficulties that women of color face in the dating world, especially women who are also LGBT+. She also talks about colorism, the difference between racism and bigotry, and privilege. Even though she loves her husband, they have to have a lot of conversations because he is white and a man, and there are some things about her world that he will never fully understand, not without having to stop and think about it, because part of privilege is that it allows you to glide past a lot of problems that are deeply entrenched into the institutional framework of our country, being the status quo.

I thought Z asked interesting questions. Kids don't have a filter or a shame button, so sometimes they end up asking some pretty brutal, uncomfortable questions that aren't fun or easy to answer. I actually think that can be a good thing, though. Mira seems to agree, although at times even she struggled with how to answer, because she wants to protect her son, even as she wants him to take pride in his identity without feeling the shame of not being "enough" that so many people-- either consciously or unconsciously-- try to project onto people who look, speak, or act different. I loved both of Mira's parents, and I thought the scenes and dialogues that arose from her husband's parents voting for Trump hit hard. How can you vote for someone who is totally against the people you love? It's a question that has an easy answer, and yet millions of Americans did that exact thing.

I definitely recommend this to people who would like to broaden their minds and think more critically about privilege, multiracial or biracial families, intersectionality, and parenting. There's a lot of really valuable ideas in here, and it's delivered in an easy-to-read format that manages to convey pretty complex concepts in an easily understandable way. The ending, with the letter to her son and the photo of him as a baby next to a paper announcing Obama's win, was especially poignant.