The Summer of Ellen by Agnete Friis 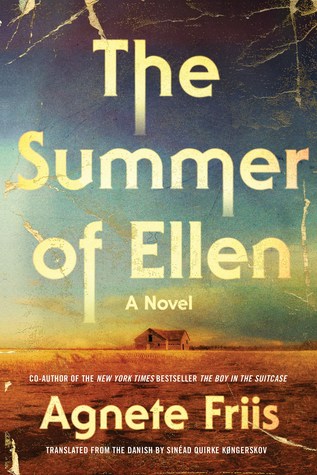 My mother is really into Scandinavian murder mysteries, so I know a bit about them, even though it's not really my genre of choice. Agnete Friis is 1/2 of a famous writing duo behind a series of mysteries about a woman called Nina Borg, and seems like it might be the Danish answer to Miss Marple. Since then, she's gone solo, and this book, THE SUMMER OF ELLEN, is one of those singular efforts.

THE SUMMER OF ELLEN is told in a dual timeline. The narrator is named Jacob, and we know him as an awkward teenager growing up on a farm with his great-uncles, and also as a married and harried architect in his forties. One day, in the modern timeline, he gets a call from his great-uncle Anton, wondering what happened with the girl he used to hang out with, a beautiful girl from the hippie commune named Ellen.

As a teenager, Jacob was infatuated with Ellen, the artistic and wild girl who lived in the commune near his uncles' farm. His life was pretty unremarkable-- his parents don't get along, his friend Sten is loyal but creepy and misogynistic, and he's absolutely girl-crazy but utterly unappealing to them. His normal and boring life is disrupted when Sten's sister, Lise, goes missing, and is later found dead. Suddenly, all sorts of unpleasant revelations about the farm and the people on it come to life.

This story is slow-paced but pretty brutal in parts. Some examples of potential TWs: One of Jacob's uncles, Anders, is developmentally disabled, and of course, he falls under suspicion for Lise's death-- he ends up being the recipient of pretty severe targeted violence. (That said, I felt like his portrayal in the story was not offensive, and it could have easily been.) Sten is a despicable human being, and there are entire Reddit threads devoted to dressing down guys like him. He makes a lot of really crude and nasty statements about women. There's animal cruelty, but this book takes on a farm, and I've learned that farms are rarely as fun and idyll as they appear to children-- especially for the animals.

I don't think THE SUMMER OF ELLEN is a bad book, but it's not really my cup of tea. The characters were not as fleshed out as I would have liked, the pacing was uneven, and the reveals seemed a little cheap and disappointing-- for example, I was able to figure out who the bad guy(s) were from the very beginning, although I was hoping I was wrong. The best part of the book is how the author captures the sleepy, Bohemian vibe of the 70s and integrates that into the story.