Some Places More Than Others by Renée Watson 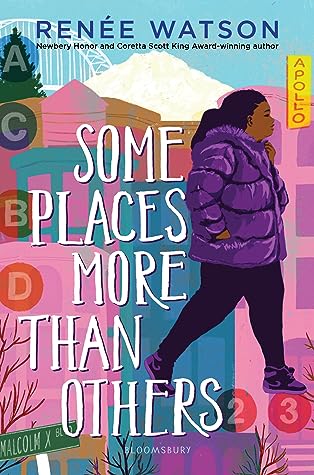 I don't read a lot of middle grade books, but I enjoyed Watson's contribution to the YA title, WATCH US RISE, that I really wanted to see more of her work. SOME PLACES MORE THAN OTHERS seemed like another title that would explore identity, heritage, and growing up in a positive and interesting way, delving in deeper to serious issues rather than merely scratching at the surface as so many books aimed at teens seem to do.

SOME PLACES MORE THAN OTHERS is about a twelve-year-old black girl named Amara, who lives in Beaverton, Oregon. Her father works at Nike and her mother is pregnant with her younger sister. She has one close friend, and apart from that, isn't really interested in much besides shoes and school-- and her one birthday wish: going to New York to meet her extended family.

Her father is estranged from Amara's grandfather and hasn't spoken to him for twelve years. Both of her parents are reluctant to allow the trip because of all the emotional baggage that will have to be unpacked, but Amara's incessant wheedling and her pointing out that there might not be a chance for "later" when the baby is born end up causing her parents to relent, although her mother issues a caveat that things will be awkward and that Amara should do her best to help her father and grandfather reunite-- because that's not pressure at all.

Amara is really excited to be in Harlem, which is rich in black history and black cultural heritage, as well as to meet her grandfather and her two older cousins. However, apart from her grandfather, nobody is really that thrilled to see her, and the distance and tension between her grandfather and her father is worse than Amara thought. As she gathers information about New York and her family for a class project, Amara learns many important lessons about family, forgiveness, and heritage, all while trying to navigate her place in the family, and the many shapes that love can take.

I actually liked this a lot. Amara can be a little annoying, but in that way that a lot of little kids can be annoying, which stems from ignorance and innocent selfishness, and not a lack of good writing. She's a fully fleshed-out character who feels like a real person, and Renee Watson did a great job writing like a kid. I also thought the rest of the family was really well-written, and I enjoyed how so many parts of this book felt like a love letter to black history and culture in New York. There are so many places and names mentioned, and I bet actually having been to New York makes those mentions even more satisfying-- I know for me, New York is on my bucket list of places I need to see; it's just risen even higher after reading this book, and seeing how awesome it is through Amara's eyes.

This is a great book for kids. It's got positive rep, good values, and deals with serious issues, and it doesn't condescend to its audience at all. Kids can sense that-- especially smart kids-- and I think SOME PLACES MORE THAN OTHERS will really resonate with its target audience.