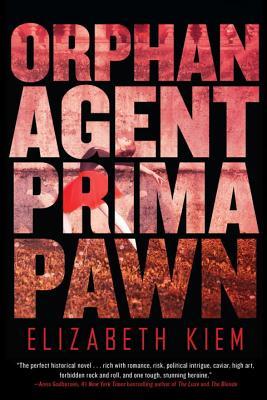 Psychic ballerina spies? I mean, with a premise like that, there was no way I couldn't read this book, even though an outlandish concept like that could really go either way. Luckily for me, this ended up being the perfect light read-- a lot like what RED SPARROW wanted to be, I think, had it not sucked. Plus, it's about ballerinas and I'm pretty sure I've said multiple times before that if the book is about ballerinas or ballet, I'm so reading it.

Svetlana is in a Moscow orphanage for children whose parents are traitors to Russia. Her mother is a stranger, imprisoned somewhere, and Svetlana anticipates her return as much as she dreads it. Ballet is her means to climb out of poverty and disapproval, and she pursues it relentlessly, rising up the ranks at a rapid pace that's aided, in part, by her assisting the KGB.

For some reason, Svetlana has psychic powers-- she can see things that she was never witness to, and one of those first things she "sees" is the assassination of her father by firing squad. It's quid pro quo-- she'll get to be a ballerina and protect those she loves as long as she provides her government with the assistance and experimentation they require.

ORPHAN, AGENT, PRIMA, PAWN follows Svetlana from childhood to adulthood, from her pursuit of ballet as a poor a struggling girl, to her first love, to her reunion with her mother, and finally to adulthood and motherhood. It can be a little dry at times, and the interludes with Svetlana's grand-daughter were weird, but I found Svetlana to be a sympathetic character, and even though there's a love triangle, I liked both Victor and Georgi equally. And that ending! That ending was great. It might be a weird and inconsistent book at times but, again-- psychic ballerina spies! I rest my case.

Apparently this is book three in a series, but it can be read as a standalone.