Hitler's Last Hostages: Looted Art and the Soul of the Third Reich by Mary M. Lane 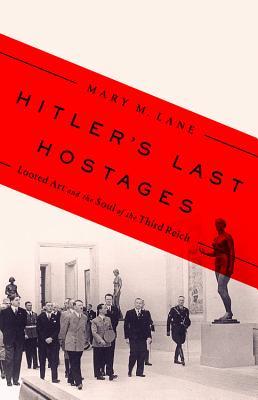 This is an incredible story, but also a sad one. I've read a lot about WWII, and generally the focus is on the tremendous loss of life that occurred-- both as casualties of the fighting, and also as a result of genocide. I've never thought of the other casualty: the loss of culture. HITLER'S LAST HOSTAGES is about the art that was looted by the Nazis or destroyed for being "degenerate." Called "the last hostages" of the war because of a dispute that happened in the 2010s, when people found out about a man named Cornelius Gurlitt, a heinous man who was the son of Hitler's art dealer, and who personally cheated many people out of their valuable works by capitalizing on their desperation, or predating on the damaged reputations of previously famous artists who were branded "degenerate." When these works, which he had squirreled away, came to light, the question of whether they should be given back as reparations or repatriated to the countries they were taken from came up as an issue-- an issue that many European governments, including Germany-- had no desire to be involved in at the time. Gurlitt, when he was caught, was caught because of tax evasion.

This book skips around a lot, but it needs to, in order to tell the story. So, we get the history of Germany's economic and moral downturn at the end of WWI, which provided the climate that allowed Hitler to take power. We learn a bit about Hitler and his infamous failed career as an artist, and his fascination with the artists who gloried in an ideal Germany through iconic fascist imagery. We learn about the artists themselves, and how some of them struggled and scraped to rise to fame, while others basked in it leisurely, only for many of them to become despised-- either for being "degenerate" or for being Jewish-- with some dying and others being forced to flee the country.

We also learn about Hildebrand Gurlitt, Cornelius's father, who left his mother behind to save his art, who had the nerve to solicit Jews for letters endorsing his character and lack of Nazi collusion at the end of the war-- who bought paintings from desperate Jewish families at a pittance, only to turn around and sell them for massive profits to grasping collectors and museums. He was also the dealer who was going to be involved in Hitler's big pet culture project, a museum devoted to German art that exemplified the ideals they sought to achieve. Lack of involvement, indeed.

Reading this book was such an emotional experience; I really wasn't prepared for how deeply it would make me feel. At points, I was actually trying not to cry. It does not hold back when it comes to describing the utter atrocities that happened to the Jews, the medical torture, the eugenics-- all of it. Lane doesn't take the easy way out, either, and paint Hitler as a mad, power-grasping megalomaniac, even though he was arguably that, too; the fact that he is humanized to some degree is worse, because you find yourself wondering with real horror what would make someone do such terrible things to their fellow human beings? How would they rationalize that? How could they rationalize it? Especially when some of the xenophobia and anti-Jewish sentiments mirror so closely the hateful rhetoric in the U.S. being sown by alt-right extremists against Muslims and Latinos.

It was so interesting to learn about the War from this new angle, and to read about many of these famous artists, like Matisse, and ones I hadn't heard of before, like Grosz, and how their careers were impacted by the War, and how the families who owned their paintings had to fight for repossession. HITLER'S LAST HOSTAGES is incredibly well written but it's not a book you read for fun or all at once. I had a really hard time getting through it at times, even though the journey is worth it.