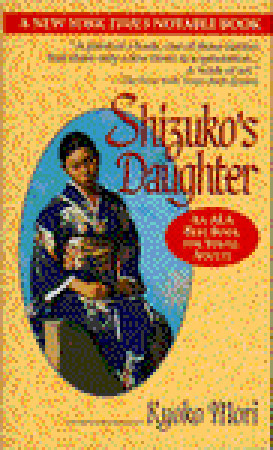 I've been mostly reviewing ARCs lately, but I spent last weekend cleaning out my room and bagging up/moving around books that I've bought. I got rid of a whole bunch that I'm no longer interested in or have already read, but I also found a whole bunch of gems that I meant to read and review a while ago and never got around to. One of those books is SHIZUKO'S DAUGHTER, an out-of-print YA novel from the 90s about a young girl living in Japan whose mother commits suicide. The novel is about Yuki coming to terms with her grief and the shifting of her family when her father remarries.

First off, obvious trigger warnings for suicide. You can sense Shizuko's depression from the beginning, when she narrates. It's not entirely clear why; some of it is due to external factors, but it's also clear that she is not a happy woman and probably hasn't been for some time. Yuki feels that she is to blame, and internalizes her grief and her anger at her father, who it's revealed was cheating on his wife with his secretary for some years. This woman, Hanae, becomes Yuki's new step-mother and hates Yuki with a passion.

The writing in this book is beautiful. It's largely character-driven, as the bulk of the "story" is just Yuki growing up and trying to navigate the empty space her mother's absence has created in her life. Her mother liked flowers, and each chapter is named after a flower that blooms in the season in which that particular moment of Yuki's life is taking place. Yuki is an odd and stubborn child. Others perceive her as happy and studious, but inside she feels awkward, self-conscious, and tactless. Hanae is awful, and her violence towards Yuki and destruction of her things was sickening. I actually just finished reading a V.C. Andrews book, and Hanae's sociopathic menace wouldn't be out of place there. I also hated her father, Hideki, for being so weak and not standing up to his new wife.

I think it's a shame that SHIZUKO'S DAUGHTER isn't more widely read, as it does a really good job portraying the erratic ways humans react to grief, and accords Yuki a lot of agency as she grows up and begins to start her own life out from under the apathetic and distant care of her parents. It's not a particularly happy book, but it's real and carefully crafted in a way that so many contemporaries aren't. I would honestly recommend this book to anyone who has experienced loss, and wants to read about someone who shares their situation, and think this would be a good addition to a classroom.