The Seven Necessary Sins for Women and Girls by Mona Eltahawy 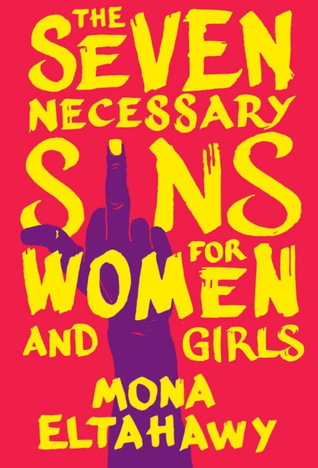 I realized I'd fallen into the trap of only reading feminist books written by feminists who were white, and since realizing that oversight, I've really tried to expand my views and read books of feminism written by women of color. This is my second feminist book written by a woman who is Muslim (Sohaila Abdulali was the first), although it is the first I've read from an Egyptian author, and I think the way she talks about her culture and religion bring a unique and much-needed view to feminism.

Mona Eltahawy was sexually assaulted at Mecca during hajj. She asked herself, if she couldn't be safe here, where could she be? The problem, she realized, was not with her-- it was with men. Yes, I know, not all men. But enough men. Enough to be emblematic of a deep inequality rooted not just in the Middle East or even in the U.S., but globally. Inequality is an epidemic.

In THE SEVEN NECESSARY SINS FOR WOMEN AND GIRLS, you can feel the author's anger vibrating from the pages. The focus of the book is of course feminism, but feminism specifically from the perspective of a Muslim woman of color. She talks a lot about racist sexism, and privilege within privilege, which is something I think a lot of white women don't really think about. She also talks about abusers, institutional sexism, and what it means to be a powerful woman. Some will likely be put off by her anger, but I think injustice should make people angry; if we feel nothing and allow ourselves to become numb or complacent, we won't do anything about it.

I liked the stories of Eltahawy's activism, and how she flipped the bird-- literally and figuratively in some cases-- to people in Egypt making careers out of oppressing women. I liked the many examples of institutional sexism in multiple countries, including the United States, and how she cautioned against making sexism the poster problem for a specific set of countries, which so many are afflicted with it. I liked how much she seems to like and respect herself, and how she made an active effort to include the LGBT+ (including trans women) in the dialogue, when so many authors don't.

I'm giving THE SEVEN NECESSARY SINS FOR WOMEN AND GIRLS a three-star review because I think it's an important read and it was good, but it wasn't fun and it was also very dry. This is more of a women's studies/gender studies textbook than something someone would read for pleasure (although I did enjoy learning about her life and her viewpoints). If you are looking to broaden your viewpoints as well and get new perspectives on feminism, you should read this book.