Gypsy Boy On The Run by Mikey Walsh 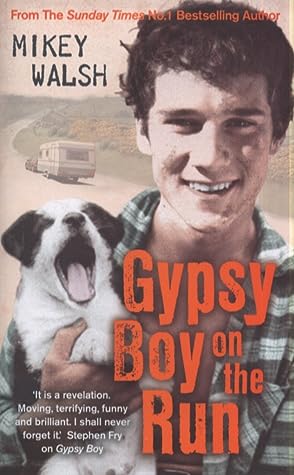 I read this book at the airport during a layover. GYPSY BOY ON THE RUN is the memoir of a man named Mikey Walsh, a self-identifying gypsy who grew up during the 90s as a closeted gay man in his Romany community. His father physically abused him, because apparently the male community among the Romany are very machismo and very young men are expected to drink, fight, and scam people for money. Mikey sucked at all of these things, so the abuse intensified as a form of correction. His uncle, meanwhile, straight-up sexually abused him, something his family and the community straight-up tried to hide until Mikey was able to reveal the uncle's grooming of one of his younger siblings for what it was.

Mikey escapes this toxic environment as a teenager by getting into a relationship with a much older man. To the older man's weak credit, he didn't realize how old Mikey was when they first started getting to know each other (13 - eek). I say weak credit because this man keeps seeing Mikey even when he finds out he's a teenager and later on, their relationship becomes controlling and then abusive.

When Mikey escapes, his father pulls all the strings in their community to track him down, sending out people to spy on him, to beat up Mikey's boyfriend and those connected with him, and then later, actually putting a "hit" on him by claiming Mikey stole a valuable ring made of gold. Both men are chased all over the country by the Romany and it becomes a harrowing tale that seems almost too far-fetched to be true. Seriously, anyone who likes trashy new-adult novels but claims to hate non-fiction should pick this up. It will be your "gateway drug" into a whole new genre, trust me.

I didn't really "enjoy" this book in the traditional sense of enjoying a book because it was so disturbing. There's a lot of abuse, of all kinds, and the matter-of-fact way Mikey Walsh recounts it adds to, rather than detracts from, the effect of it. I kind of got a sense that he was sort of saying, "This is just the way things are," and even though he acknowledged how toxic and dysfunctional his ties and relationships to these people and communities were, the way it felt almost normalized was a cold shock. But I guess if you grow up under conditions like that, it could feel normal, since normal is subjective and defined by what we experience on the regular. It made me realize that I'm privileged enough to think of abuse as "abnormal," and realizing it could be someone's normal made me sick.

Still, it's an interesting book and I think it will appeal to people who enjoyed books such as THE GLASS CASTLE and RUNNING WITH SCISSORS.