The Love & Lies of Rukhsana Ali by Sabina Khan 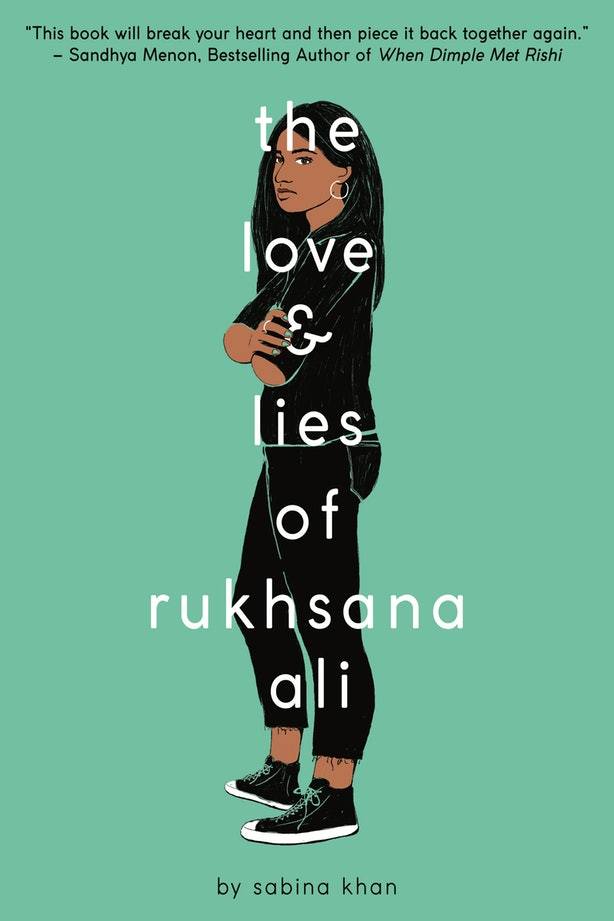 THE LOVE & LIES OF RUKHSANA ALI is a tough book to rate because there were things about it I really liked, and things about it I didn't. I don't think I have ever read a book about a gay Muslim girl before, so that is a major plus, because diversity is important and I'm glad that publishers are actually making an effort to include not just stories about non-white, non-christian characters, but also stories about those characters that explore gritty topics and aren't afraid to make the reader uncomfortable.

Rukhsana is seventeen-years-old and in many ways, she's a lot like any other typical teenager: she goes out with friends, hides her scandalous clothes from her parents, and experiments with alcohol. But she is also a lesbian and has a secret girlfriend that she has yet to tell her strict Muslim parents about. She hates lying, and her girlfriend hates being treated like a guilty secret, but Rukhsana is afraid that her parents will completely freak out if they find out her sexual orientation and take drastic action, including, but not limited to, denying her wish to go to Caltech.

It was hard to like Rukhsana- the way she treated Ariana wasn't great and I don't think it was the best example of a healthy relationship. Was it an example of a real high school relationship? Definitely. Lots of lying, lots of anxiety, lots of attraction. Younger readers might be more willing to tolerate Rukhsana's actions and find them more identifiable, but I didn't really see the appeal there. I sympathized with her problems and understood that she was coming from a difficult place. The struggle between family tradition and finding one's own way was done really well and I thought Sabina Khan did a good job showing the emotional tug of war that Rukhsana was in.

The biggest problem with this book, for me, was the writing. It was disjointed and the dialogue felt wooden and inauthentic in a lot of places. I didn't really feel like I was reading from the voice of a real teenager, even though Rukhsana was selfish and self-absorbed in a way that a lot of teens probably are, the way it was written really didn't reflect that. The writing gets much better towards the end of the book, when Rukhsana's parents find out about her girlfriend and do go ballistic.

In the book, Rukhsana's parents try to push her towards two boys, Ifran and Sohail, and both of them have dating problems of their own that their parents aren't going to want to come to terms with. I liked that the author didn't try to make these boys evil to make her relationship with Ariana seem more "pure" by comparison, and enjoyed the discussions that arose from her conversations with these boys about things like parental acceptance, dating outside your ethnic group, being an LGBT+ Muslim, and hate crimes. It was harder to reconcile Rukhsana's parents' reactions to Rukhsana's sexuality. Without going into too many details and spoiling things, some of what they did was definitely abuse from a Western lens, but I know parenting is different in different cultures, so maybe what they did is considered normal or forgiving in Muslim/Bengladeshi culture. I can't presume to say, but I found it really disturbing to read at some points and hard to stomach.

There's also three pretty devastating reveals that happen towards the end of the book with three different characters, all three came out of left field and are potentially triggering. They involve hate crimes and physical/sexual violence.

Even though THE LOVE & LIES OF RUKHSANA ALI is a bit uneven, I think it raises a lot of valid topics that many teenagers are facing and dealing with today in a rapidly changing society where the younger generation is often much more liberal and dynamic than their more traditional and conservative elders. It's also a great portrait of a sometimes toxic family dynamic and familial acceptance, love, and forgiveness. Scholastic seems to be taking more risks with their books lately, and I appreciate that, even if I didn't love this book the way I wanted to.