As Black as Ebony by Salla Simukka 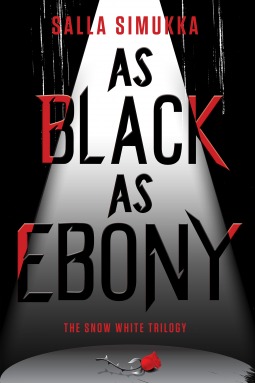 AS BLACK AS EBONY is apparently the third book in the series, and while I did feel like I was missing some information, I could easily read it as a standalone. Lumikki has just returned back to Finland from Prague after a terrible disaster befell her old school. She was able to help avert disaster, and has taken up with her old Finnish art school, acting as the lead in a feminist retelling of Snow White called The Black Apple, and dating a dreamy boy called Sampsa who's the perfect boyfriend with the perfect life.

Someone is stalking Lumikki, now, though. Someone who claims to know a lot about her life, including a dark secret about her family that not even her parents will tell her. This person, who calls himself (or herself) the Shadow intends on running Lumikki around, like a rat in a maze, until they are ready to make their move and reveal themselves to her as a paramour-- but if she tells anyone about the letters, she is warned, the night of the play will end in blood.

I was super impressed by AS BLACK AS EBONY. The mystery element was done well and there was no shortage of suspects for the stalker. (And no, I didn't guess who it was-- a plus.) Lumikki is an engaging heroine who is clever but also weary; she appears to have suffered a lot over the course of the trilogy, and is ready to just be left alone and live the ordinary life of a high school student.

Also, I just want to appreciate how sex positive this book is. Lumikki's relationship with her boyfriend is portrayed as totally natural and normal, and there's no shaming or jealousy or cattiness between Lumikki and any of the girls. Also, Lumikki's ex-boyfriend is transgender and their break-up was because he wanted his space to think about his transition, and not due to any bigotry. She also uses the correct pronouns for him, even when talking about him pre-transition, and it was very respectful and correct (and something that a lot of U.S. books fail miserably at). The rep there was well done, and I really appreciated that and wish more U.S. books were the same.

I really enjoyed this Finnish YA thriller and am interested in reading more by this author.