The Club by Takis Wurger 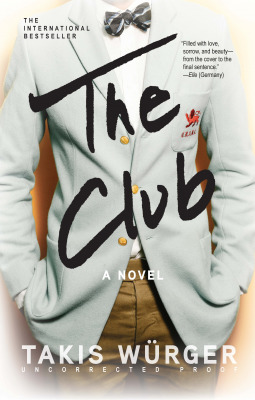 THE CLUB is one of those books that's okay but kind of feels like about half a dozen other books that have done it better. Hans is a young sensitive German boy who loses both of his parents in two separate freak accidents. He ends up being put in the care of his English aunt, Alex, who is mostly hands-off-- until she suddenly requests a favor: she wants Hans to help her, by going to a prestigious university, to examine a secret club called "The Pitt."

Once there, a young and beautiful woman named Charlotte helps him get an "in" and gather reconnaissance, but she has secrets of her own, too. And as Hans gets more deeply involved with the secret boxing club, he starts to learn that the secret society has a dark under belly they don't exactly advertise to the public.

As I said, secret societies have kind of been done to death. I've read two books about secret societies in as many weeks, and both of them were more interesting than this book. THE CLUB isn't bad, but it isn't exactly the sensational blockbuster I was hoping for, either. I wonder if part of that is due to the translation, as all of the characters (there are multiple POVs) felt distant and removed in the narrative, and a lot of them had some pretty heavy stuff going on that necessitated emotional reaction.

I really liked the premise and it was a brisk, short read, but don't pick this up expecting any game-changing. It's a great book to read to pass the time, but isn't memorable and probably won't linger. I was able to guess what the dark twist was 20 pages in, which was disappointing but not shocking.