An Honorable Man by Rosemary Rogers 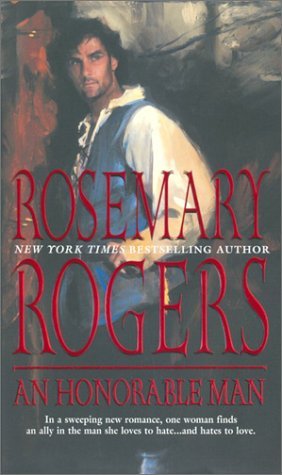 AN HONORABLE MAN is set first right before and then in the early times of the American Civil War. Cameron is the daughter of a Mississippi Senator who owns a plantation. For her whole life, she has basked in the privilege that came at the cost of the exploitation of others. When a man named Logan - a man who Cameron did some heavy petting and almost lost her V-card to before he broke her heart, coincidentally - comes to the plantation, however, he drops a heavy truth bomb on Cameron's father: war is coming to the South and he's got to make a choice about which side he wants to be on.

Cameron's father decides, since this is a modern romance novel, that of course he wants to help out the North and free all his slaves/servants. He's been sleeping with one of the servants for decades and in fact, Cameron's own personal house-servant, Taye, is actually her half-sister through this union. When he informs Cameron's brother Grant that not only is he giving up his inheritance (the plantation), but also the servant that he's been lusting after for years is also his half-sister, Grant goes crazy and murders him.

Cameron must put her feelings for Logan aside to save the servants and Taye from Grant's insane scheming and plotting. But time is running out, because the South is beginning to starve, and Grant is putting up all of the servants for auction and isn't above hurting Cameron and Logan in order to get what he wants: a bloated pocket book and the preservation of his shriveled sense of honor.

I liked this book but it had a lot of flaws. First, a word of caution: Rosemary Rogers is pure trash. Glorious, decadent 80s trash. If Jackie Collins wrote historical-fiction, it would probably look a lot like Rosemary Rogers. And like Jackie Collins, vintage Rosemary Rogers is better than modern Rosemary Rogers, when her cheese was unfettered and didn't bother with things like political correctness and word count limits. SWEET SAVAGE LOVE this most certainly is not, so if you picked up AN HONORABLE MAN expecting a bodice-ripper, you won't get that.

I actually liked Logan - he wasn't a bad man, and in fact is an honorable one for the most part (he does threaten to take advantage of the heroine, in his assurance that she does want it). He was just alpha enough to be interesting, but not so much that it felt like borderline or actual abuse. The villain of this book was also completely cray-cray - cray-cray in a way that was charmingly reminiscent of the ghosts of bodice-rippers past.

I did not like Cameron. I liked her in the beginning, but then she became a foot-stomper and insisted on treating Logan like garbage, even though he sacrificed so much to help her. I'm a fan of love-hate romances but there has to be a reason for the hate beyond spoiled, irrational pettiness. That's not sexually charged; that's just annoying. The attempts to write black dialect were also cringe-worthy, as was the rather dubious decision to include voodoo and a very white-washed "mulatto" secondary character who was fetished for her blue eyes and fair skin. Stuff like this is easier to stomach when the author is clearly throwing all caution to the wind and writing an un-PC mess, but when you try to make things like this diluted, it becomes extra cringe. Go big or go home.

This was a fun book to read on the bus but if I was reading it at home, I probably would have tossed it aside in favor of something else. I'm still a Rosemary Rogers fan but this was not her best work.