His Unexpected Legacy by Nina Hatori 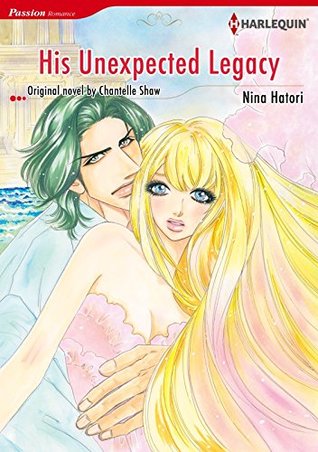 It occurred to me the other day, after finishing a travel memoir about China, that I haven't reviewed a romance novel in a while-- and it's very important that I stay on brand. Luckily for me, a whole bunch of Harlequin romance manga went on sale in the Kindle store for 99-cents. What a great way to make up for lost time! Harlequin manga are like the 100 Calorie Packs of romance novels-- Japanese artists "adapt" Harlequin romance novels into bite-sized shoujo and josei versions of the books, condensing the story down to bare bones and then pairing it with art. I know it sounds ridiculous, but there are a lot of ridiculous things in the world and at least these are fun.

I don't believe I've ever encountered a work by Nina Hatori before and I'm sorry to say that I really don't like her art style. The way she draws women is fine, although the art on the cover is better than the frail, overly flowery way that her ladies look in the books. But the way she draws dudes-- especially the hero, Sergio-- is freaky. Super boxy, super muscular, with, like, ripped Ken doll style anatomy. I really did not like it. At all.

The story doesn't really stack up, either. I saw one of the other reviewers say that this story was creepy-- and yeah, a lot of romances can be creepy, so that's a criticism I always take with a grain of salt. But no, I 100% agree with that reviewer. Sergio is creepy. He's ten years older than the heroine, and a billionaire, so the power dynamic between them is unequal in virtually every way. When they meet, she's accidentally trespassing on his property (she wanted to dance by the beach). Of course, she's an Olympian dancer, so he's utterly captivated, and he manages to persuade her to his bed.

He calls her all these weird and objectifying endearments (like "kitten," which I find really unattractive), even when she protests. Then he tells her that he wants to make her his mistress, and that he doesn't do "love" or "families." Later on, we find out that he has major mommy issues because his mother was abusive, but the heroine doesn't know that, and she absconds. Then this book turns into a "secret baby" story, because in the three years that pass, it turns out that she had a kid, now a toddler, and she is struggling to raise him in poverty as a single parent (athleticism didn't work out).

When she sees her old fling on the cover of a tabloid announcing his impending engagement, she is furious (and jealous), and marches to his "engagement party" to demand money or support or answers (not really clear). He recognizes her and traps her in his mansion, tells her the engagement was just a rumor, and then they spend the night together. He then finds out that she has a kid, knows immediately that it's his, and just magically decides that fatherhood is for him because he must support his legacy. Which is all well and good, except when he sees that the kid has bruises, he jumps to conclusions and KIDNAPS the kid on a plane, leaving behind his lawyer to explain to poor, frantic Kristen that if she wants answers, she'll have to take a plane ticket to see him in person. LOL what.*

*Side note: if your spouse takes the kids because they think you're abusive, it's probably not wise to march right up to them and slap them-- in front of witness-- when you confront them about what they did.

Spoiler: Everything works out, there's a happily ever after, the hero is forthcoming about his mother issues, there's a twin brother for some reason, and the book ends in precisely what the hero said wouldn't happen in the beginning of the story: marriage and family.

I wish I could have liked this book-- I do like the cover art-- but the art style and the bad story totally put me off. I can be a fan of alpha heroes, but not when they're approaching used car salesman levels of sleaziness. YMMV, but trust me when I say that there are much better HQ manga out there.